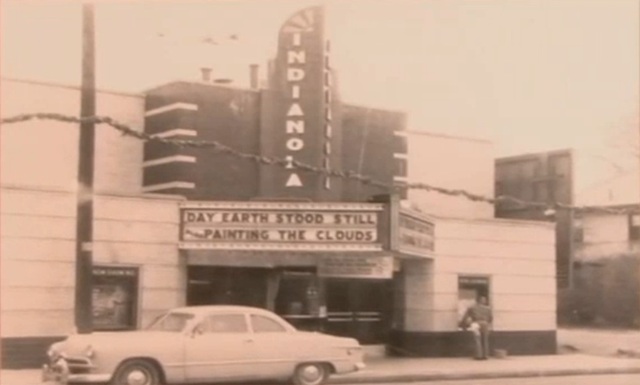 Opened as the 700-seat Indianola Theatre on February 19, 1938 with Katharine Hepburn in “Stage Door”. On November 13, 1957 it was renamed Fox Theatre and began screening adult movies with the nudist movie “Garden of Eden”. The only independent neighborhood theater left in Columbus. On May 20, 1964 it was renamed Studio 35 screening an Ingmar Bergman double bill: “Winter Light” starring Ingrid Thulin & “Wild Strawberries” starring Victor Sjostrom. It still shows double features and has added beer, pizza, subs, and salads to its concessions.

On 9/3/15, the Columbus dispatch reported there are plans to add a second screen by putting a second floor addition on the building. If approved by zoning and other community boards, construction could begin in 2016. The new screen will seat 70.

The real marzetti’s Studio 35 movie Theater Story! Okay, so lets get something clear. This maybe very interesting to you, but I am one of the sons of Frank Marzetti (my father) and I can tell you stories you couldn’t and would not even imagine in today’s world.

My name is Kayne Larkins Marzetti (Kelly Marzetti nick name back when I was young) I lived the movie theater dream at Marzetti’s Studio 35.

I am 55 years old now and I started at 6 years old cleaning the movie theater early in the mornings before I went to school. My father was Italian and German and was related to Teresa Marzetti of Marzetti’s Salad Dressing.

He was obsessed in making the Marzetti name great and him and my mother Salli Larkins Marzetti ( daughter of Richard C Larkins which was the athletic director at the Ohio State University from 1947 to 1970 at the time. My mother was very creative and was a huge part in creating the movie theater.

It really was first a X rated movie theater and changed over to more of a unique movie theater. My father new the business since he had worked the business at the Granview theater when he was young but my mother who also owned and operated Marzetti’s Talent Agency that booked rock bands in night clubs and had the creativity and the brains, remember she was a incredible talented writer.

I cant remember my father ever living at home, he lived in the apartment upstairs above the movie theater with our German Shepard tora, and many more after that.

They guarded the theater at night because people would break in and try to rob the cash box. One morning I woke up and toro was in the back alley fenced in area by the pizza kitchen where they would try to break in and her bloody with bullets in her, she was still breathing but she died protecting the theater and they never got passed her, she was very loyal.

In the late 60’s when we were showing X rated movies and my father had to baby sit us boys at the time he would put three of us boys in the projector room on a mattress that was a upstairs area between the projector and the theater, buy us a pizza and said watch the movie and keep quite.

My oldest brother said but dad they are naked? ,he said son you will have to learn some day so you had better get used to it!, eat the pizza and stay quite you may learn something. i think I was 6 years old at the time.

I can remember waking up at 5:30 am every morning and cleaning the theater. My pay my father said, what ever change you can find under the floor!, he was old fashion Italian and believed in you earning your money the hard way to prepare you for life.

He would say son I want these floors so clean you can eat off them. I would have to first pick up all the trash like popcorn tubs, coke and beer cups, then after I completed the trash detail I would broom each isle, and seep under all the seats and I remember the floor was a gray painted concrete.

Once this was done I would vacuum the main carpet isles and mop the painted floor with bleach and ammonia. He would inspect it and if it was not to his liking he would have me do it again.

People back in the 1970’s were able to smoke cigarettes in the theaters and even would smoke marijuana almost nightly, I would sometimes find a bag of marijuana and say dad what is this?, he would say nothing give that to me. I would find hats, coats, gloves, used rubbers that I thought were used balloons popped at the time and even a pair of woman’s underwear one morning.

I would find wallets with money, credit cards, purses left behind, I never took anything except the change on the floor and gave the other stuff to my father which he would put it in the lost and found box. Wow the memories are so vivid and clear just like yesterday.

I can even remember when my father received a beer and wine licence and was the first to have one in Ohio for a movie theater. This was a big deal for him and I helped his right hand man Dale Bachman build the bar and pizza kitchen. this guy was amazing and very talented with mechanics.

He fixed everything and was a big part of his companies in the future. I learned a lot from this guy from electrical, plumbing, carpentry, concrete and just about everything a handyman could do. He was a huge impact in my life and who I am today.

Well my life at my fathers movie theater went on daily and when things were slow I would find my drifting off into a Marx Brothers movie, perhaps a James Bond movie and I still cant get rid of that song the Yellow Submarine which I must have watch a hundred times from the Beatles, yes we played a lot of Beatles movies at that time, because that was the era was peace, love, rock and roll, and lets don’t forget Woodstock!

How life has changed from those days and the memories are like eating the chocolate covered raisins we used to sell, simply delicious!, despite the hard work it made me the man I am today, Married 25 years to a Italian Latin Venezuela woman with two beautiful daughters one one income.

Yes, I still live the 1960’s even today with my wife as a wonderful homemaker caring for my daughters as a bring home the bacon.

We have had our struggles, but without how I was raised by this frugal, old fashion Italian father Frank Marzetti, working as a child in Studio 35, I would not be were I am today. Those old school values, despite sometimes I hated him and even might say it today, really loved him even though he never said he loved me.

I really learned the value of life, family and money from him and maybe it was just how he was raised because his father was a Entrepreneur as well and maybe treated him the same.

I can truly say I have lived a incredible life and will always cherish those memories growing up at Marzetti’s Studio 35.

Written by Kayne Larkins Marzetti Owner and operator of :

pooldesignconsultant.com ( 3D Pool Design and Construction Plans for Pool Companies all over the world)

landscapedesignconsultant.com ( 3D Lanscape Design and Construction Plans for Pool Companies all over the world)

craftsmanpools.com ( High end swimming pool project management for pools over $500,000 for homeowner all over the world)

poolwebsites.com ( custom websites and hosting for pool companies all over the world)

landscapeswebsites.com ( custom websites and hosting for landscape companies all over the world)

Our newest company owned and operated by my wife and two daughters in the making:

Lovely story, Kayne. It’s a bit off-topic, but could you say a few things about popcorn fritters.

Kayne, we’re sorry your dad didn’t tell you he loved you.

Construction UPDATE: It has finally started. We are so excited for the upcoming upgrades that include: A second screen with 30 reclining seats, new main auditorium seats, upstairs bar seating, new windows/doors to let light in the bar areas, and many more. We will stay open for most of the renovations, so we can still show the summer blockbusters. If you have any questions, please ask any of the staff or email me at or give me a call at 614-226-4755. We will provide plenty of updates along the way. Thanks for making Studio 35 an amazing place to watch movies or just have a drink. Because of your support we are able to make the space even better.

Recliners are now installed in the main theater. Second floor screening room open and has 28 recliners.

I believe this is the list of name changes for this theater:

Theater was then put up for sale.