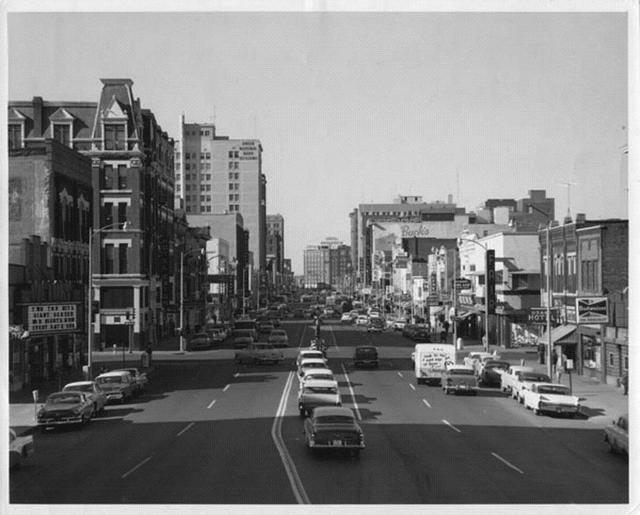 The Victory Theatre had a long façade constructed of brown and tan tapestry brick arranged in a 1930’s Art Deco pattern. A long orange and yellow box marquee ran across the length of the theatre.

A circular box office and poster boards were made of baked orange enamel metal. Yellow and orange light bulbs formed tracer patterns on the marquee underside.

The T-shaped lobby smelled musty, was sparsely furnished, but very spacious with narrow staircases at each end of the chamber. Carpeting had a woven wine and grey tropical design. Lining lobby walls were silver framed poster display cases, and tall, slender, silver sconces. The ceiling had box step cove lighting trimmed in silver. There were four auditorium entrances, each surrounded by silver plasterwork.

Upstairs was a long, Art-Deco style furnished mezzanine where the restrooms were located. There was no balcony.

An offending stench permeated an auditorium that was quite wide, but not particularly deep. It had isles running along both side walls, and two more isles that separated three sets of seat rows. Auditorium walls had silver framed plasterwork panels that framed zig-zag artwork, and wall sconces that matched those seen in the lobby. The ceiling had a vast square cove, decorated in stencilled design, with an amber glass, six point, silver light fixture. A wide stage was heavily draped in wine color valour and silver fringe.

Regrettably the old Victory Theatre had not been well maintained and was a bit rough around the edges. There were around a dozen other men watching those sizzling films, but no women.

The Victory Art Cinema was closed on October 30, 1977 with John Holmes in “The Danish Connection” & “Back Stage”. It was demolished in November 1977 and a park was created at this address.

Do any of you theatre buffs know in which Wichita theatre a juvenile vaudivillian named Louise Hovick developed her stip tease routine and changed her name to Gypsy Rose Lee?

A gentleman who grew up in Wichita recently told me that the Victory, though not identical, was quite similar to the Empire in Grand Forks, ND. While the Victory decor had a silver & wine color scheme, the Empire was decked out in tan & wine.
Buchner & Orth could have designed both theatres, though it is most likely that the Victory was a Boller Bros. creation.

Miss Melba, According to local legend Gypsy Rose Lee did her first routine on the Orpheum Theatre’s stage. Many believe instead of the Orpheum she first did her routine at the old Marple Theater at 417 east Douglas.

Here is a photo of the Victory neon sign.

When the Victory Theater was in its hay day, it was a clean and well kept up place! But as the years went on past 1963 it and several other land marks started to fade and disappeared. Another wonderful place down town was the great Fairland Café, it was a great Chinese restaurant that stayed open 24 hours a day on Broadway, and half a block South of Douglas St.

A demolition sale in November of 1977 allowed people to buy the original sunflower designed ceiling and many other artifacts uncovered during the razing of the venue including six giant murals and a box of 1950’s era unused 3D glasses. The theater was removed for urban renewal bringing about Naftzger Park 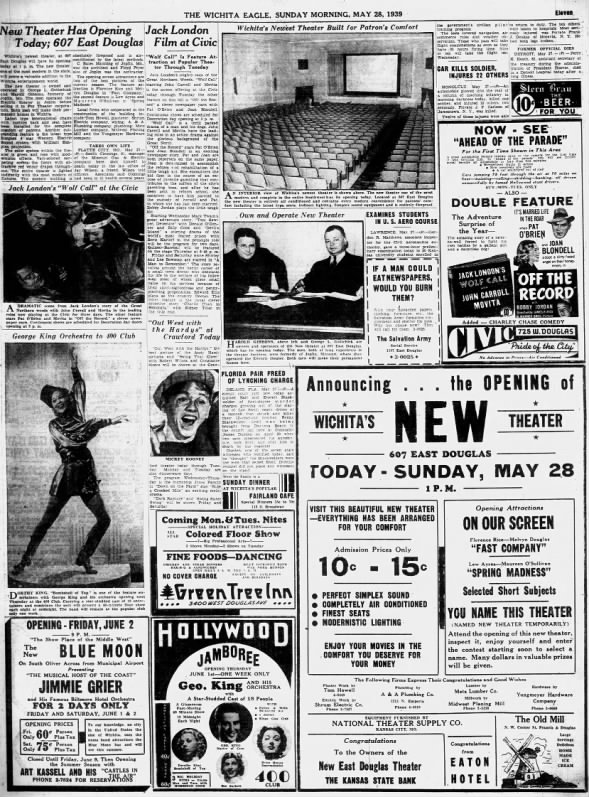