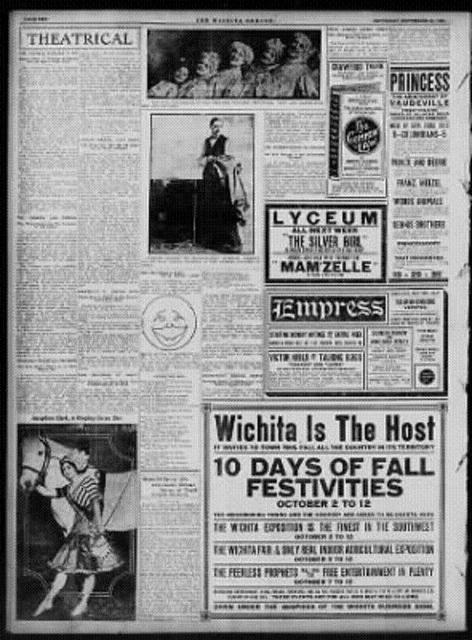 The October 27, 1917 issue of the Wichita Beacon reported that “[t]he old Empress Theater, on South Topeka, now called the New Liberty Theater, will be reopened Saturday, November 3. The entire interior is being rebuilt.”

The December 8, 1917, issue of The Music Trade Review reported on the New Liberty Theatre, saying that it was on the corner of Topeka and Williams Street. Our Street View should be moved to the south end of the block, about where Google Maps' estimated address is 178 S. Topeka.

The latest mention I’ve found of the Liberty Theatre in the Wichita Daily Eagle is from October 5, 1919. It gives no indication that the theater was to be closed at that time, but as it is not mentioned in 1910 the house was most likely dismantled in late 1919.

This house had yet another name before becoming the Empress. The August 14, 1912, issue of the Wichita Daily Eagle said that the locally-controlled Peerless Entertainment Company had taken control of the Pastime Theatre and would convert it into a vaudeville house called the Empress after extensive rebuilding to add a balcony and enlarge the stage. The enlarged theater would present Sullivan & Considine vaudeville acts.

The December 29 issue of the same paper said that the new Empress Theatre would open the following day. The company operating it was now called the Interstate Amusement Company.

I’ve found the Pastime Theatre mentioned in the newspapers as early as 1910, but it might have been opened earlier.