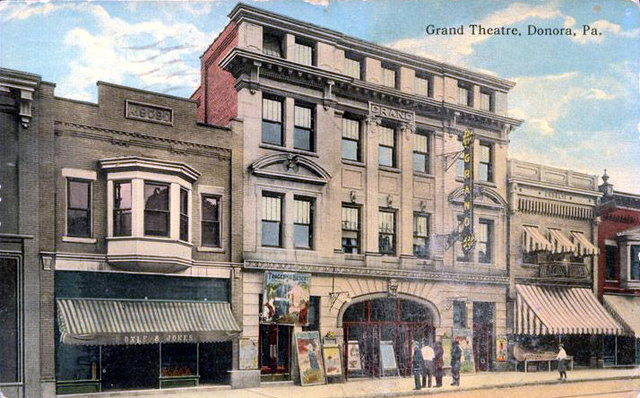 Opened as the Grand Theatre, it was screening movies by 1911. In 1930 it was renamed Harris Theatre and was operated by Warner Bros. Circuit Management Corp. It was closed May 11, 1958.

Wasn’t there a relationship of some sort btwn the Warner Studios and the Stanley-Warner Theatres – possibly S-W taking over the Warner theatres after the Paramount Consent Decree or something like that?

According to information received from the Donora Public Library, a 1976 diamond jubilee program states, in part, “Hopton and Evans built the Grand Theater on McKean Avenue. Later it became known as the Harris Theater. The word ‘Grand’ is inscribed in stone above the front of the building. It was at the Grand Theater where Dick Powell came to sing and act, as well as other famous singers and actors. Boxing shows were also held on the stage of the Grand Theater.”

The Grand should be listed as an aka.

I grew up in Donora in the 70’s. The Liberty was the only one left then – it was very run down. I saw Willie Wonka there. Then it closed, and reopened around 76. I remember a double-bill there also – was Tom Thumb, and a strange documentary tiltled Beyond and Back. We saw a very grainy/linty Jaws there about a year after it’s realease. Then it became an adult theatre.

Growing up in Donora at this point of time was unique. The townsfolk always spoke of this magical “days gone by” era, of economic vibrancy. The mills were gone, we watched all the car dealers, stores, JC Penney, etc slowly close up. Gosh, we had a McDonalds that opened, then closed it’s doors two years later! There were scores of neighborhood stores, 4 or 5 to a block – all gone now.

I have an old postcard from the Grand Theatre.

Here is a link to a photo of how the theater looks these days:

Lost Memory: Here is a 43 minute video from the Weather Channel about the Donora Death Fog.

I have a couple of postcards from the Grand Theatre in Donora advertising the Vitagraph 1911 film VANITY FAIR. Although only a three-reeler, it was a huge production at a time when most films were only one reel.

(May 8, 1958, The Daily Independent, Monesen PA)
Donora Theatre To Close Sunday
The Harris Theatre in Donora will close its doors after the last performance Sunday night, Mrs. I. Russell Davis, manager, announced
today.
The Warner Brothers-owned theatre is being closed for the summer months because of present economic conditions, it was stated.
Mrs. Davis said it is hoped the theatre will open again in Sepember.