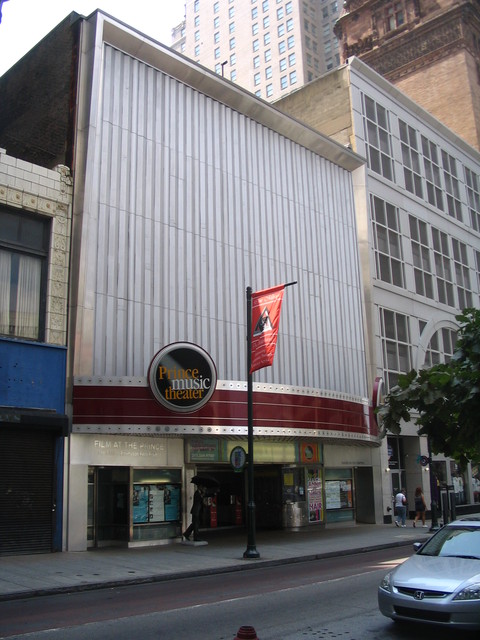 The Karlton Theater opened on Chestnut Street between Broad Street and 15th Street, on October 17, 1921, as a second run movie theater. The theater was built in a building that existed at least as of 1880. A photo of the building as Jacob Reed’s store, a famous clothing store that later built a flagship on the same block, appears in the book ‘Philadelphia’s Rittenhouse Square’(authors Robert Morris Skaler and Thomas Keels, publisher Arcadia, 2008). The theater was designed by Philadelphia theater architects Hoffman-Henon Co. Lobbies and foyers had Italian marble and fountains. The auditorium had 1,066 seats on one floor. It was equipped with a Kimball 3 manual 13 ranks organ. By 1941, it was operated by Warner Bros. Circuit Management Corp.

In 1943, Philadelphia theater operator William Goldman Theaters Inc acquired the Karlton Theater and changed it into a first run movie theater. The world premiere of the movie “Adam’s Rib” was hosted November 16, 1949. With a double feature of “Gilda” and “Platinum Blonde” the Karlton Theater closed on October 16, 1950.

Renovations were carried out by architect David Supowitz. Green plastic covered most of the façade, and giant letters spelt out the theater’s new name, ‘Midtown’. The Midtown Theater reopened December 23, 1950, with the world premiere of the movie “The Goldbergs”, with the stars present and civic leaders, including the mayor. The popular film “Harvey” was shown in 1951. In 1954 a huge screen was placed in the auditorium to showcase Todd AO 70mm epics. In 1946, nearby, Goldman opened the theater named after him, the Goldman Theater, and also from 1943, on Chestnut a few blocks to the east, he operated the theater he named after his son, the Randolph Theater. The Midtown Theater was his flagship, where he had so much success that in 1967, two blocks to the west on Chestnut, he built the Regency Theater to show more movies.

In 1972 William Goldman sold his theaters to local operator Budco. The world premiere of “Rocky II” was held at the Midtown on June 14, 1979. Budco twinned the Midtown Theater’s auditorium by building a wall down the middle. The last movie to be shown in the single screen auditorium was “Caligula” on May 20, 1980. The Midtown Theater reopened on June 13, 1980 as a twin with “The Shining” on both screens. First run movies continued with the company Budco sold its theaters to, AMC, until the Midtown Theater closed in 1995. In that year, the theater was purchased so it could become a live theater, for the American Musical Theater Festival.

After renovations, in March, 1999, the newly named Prince Music Theater opened, named in honor of Broadway producer and director Hal Prince. The exterior of the Prince Music Theater resembles the 1950’s Midown Theater exterior except the green plastic was replaced with aluminium and a new marquee installed. The interior is new, including the new 446 seat main auditorium, and a mural that Al Hirshfeld created in the redone lobby. The new auditorium occupies much less space, as the lobby was expanded, a taller basement was created, and a back stage was built. The Sansom Street wall of the new back stage is where the original movie screen used to be. When there is a live show on stage, the new movie screen is flown into the new fly tower. The second floor former ballroom was renovated to become a black box theater that can accommodate up to 150 people. Director M. Night Shyamalan and star Bruce Willis attended the world premiere of “The Sixth Sense” on August 2, 1999 at the Prince Music Theater.

In 2010, the theater was rescued in bankruptcy by being purchased by invertors and leased to a non-profit organization. They rented it out for live shows and films, but announced closure in 2014 after the death of philanthropist Herb Lotman, who chaired the non-profit board. In 2015, the Prince Music Theater was purchased by the Philadelphia Film Society for film screenings and to be rented out for live shows. It was renamed Prince Theater. Starting with “Tomorrowland” on June 22, 2015, movies returned daily to the Prince Theater for the summer. The main 446-seat Prince Theater auditorium has a large 32ft 6inch wide, 17ft 6inch high movie screen. The 150-seat black box theatre is also equipped to screen occasional movies.

That’s interesting. I’m kind of glad they are keeping the main auditorium intact as it may be large by today’s standards but it is still under 500 seats. That being said, IMO, with all the upgrades in sound and projection (and the addition of 70mm capability) I really do hope they put in a new permanent screen that can take advantage of most of the width of that stage. At 32' wide the current flying screen is smaller than the screens in the big rooms at Riverview Plaza. No question that width stage and size auditorium should have at least a 50' wide screen (if not wider) especially if they want to do justice to any future 70mm screenings. I’m not sure, but I am guessing that if they are going to be installing Dolby Atmos Sound, a new permanent screen would be a must considering the number of speakers behind the screen.

I wish they would put the old marquee back instead of that red design.

Tonight & next Tuesday eve, “Apocalypse Now Final Cut” here. Digital. The theater has 2k projection, 7.1 surround sound. My notes are that the “Redux” version was here 7-31-01.

Oh awesome. I hope this theater does well

That red design marquee is covering the marquee that William Goldman Theatres put up when the renovated the Karlton into the Midtown.

Phila Film Society email today with 2 photos (to add to gallery) The Film Society is proud to unveil an updated and renovated second floor theater at the Philadelphia Film Center.

Stop by the Film Center and see the new space and enjoy a first-run film or one of our upcoming special programs.

Would love to see the red design marquee converted back to the Midtown marquee.

This year, the theater will turn 100 years old.

Passing along the link to my 3-page 60th anniversary retrospective on WEST SIDE STORY, which includes a historian interview and reference listing of its roadshow engagements. The year-long Midtown run gets a mention.