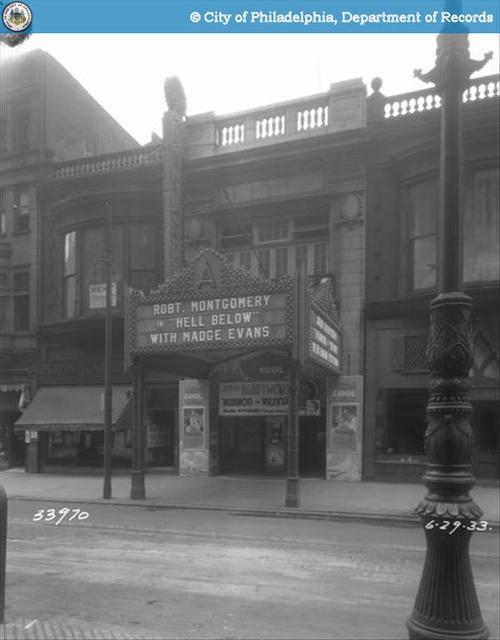 The Arcadia Theatre was on the north side of Chestnut Street between 15th Street and 16th Street. Alexander R. Boyd built the theatre. The two story façade was brick with white terra cotta. The main lobby had a cove lit ceiling, polished brown marble columns with gold Corinthinan caps and marbled and mirrored walls. The auditorium was decorated in a French Renaissance style and had a Kimball 3 manual 20 ranks theatre organ.

The Arcadia Theatre opened April 24, 1915 as a first run movie theatre with the movie “The High Road” and prices of 15c for matinee and 25c for evening shows. The April 25, 1915 Philadelphia Inquirer reported that the theatre had an air-conditioning system. and that the overall design was part of a shift towards more elaborate exhibition spaces such as picture palaces.

By 1943, a newer, circular or curved marquee was present. In 1967, the façade was remodeled and a newer marquee (which fronts the current store) was installed. The main ornate lobby was gutted, and expanded into what had been the store to the west that was built with the theatre. A basement lounge and more restrooms were added. The décor of the auditorium was also made plainer. The Arcadia Theatre advertised ‘a giant new screen’.

The Arcadia Theatre closed in 1978 and was converted into a fast food restaurant, Gino’s, which became Roy Rogers when that chain purchased Gino’s. Sad as it was to lose the theatre, it was the most interesting fast food place in town. It retained the slope of the theatre, with a ramp to the former stage where the food was sold. The seating was in tiers in the former audience area.

By the 1990’s, the restaurant had closed, and after years of being boarded up, the main floor became a women’s clothing store. Posted on the building in 2004 were photos of the upper portion of the former auditorium, now a second floor, showing that it retained ornate décor including the upper portion of the proscenium arch and a ceiling dome, and was available for rent. From 2009, or earlier, until 2013, the upstairs was the Chestnut Club at the Arcadia Theatre, a catering and event facility. In 2015, Mandees, the women’s clothing store had gone, and the building was being redone to be the 2-story flagship store for Five Below, which offers goods for $5 and below.

We didn’t get to this theatre until the late ‘60s after it had been modernized. I recall the drop-ceilings with fluorescent lighting mounted above them, yet the bulbs weren’t visible from the floor (trust me, as a kid I looked for them!) and always thought the decor was really cool. Hated when Roy Rogers took it over, but at least it still kinda resembled a theatre (remember the giant red neon RR sign where the screen was?) And Mandee’s just destroyed the place. ARRRGH!

“Arcadia Theatre in Philadelphia was the first movie house in the USA to install an organ”. Quite possible. It was, however, the first movie house in Philadelphia to install Dolby optical stereo..also Dolby’s short-lived “Quintaphonic” sound system for “Tommy” 1975..(I posted this in January 2005 here)…A fairly full view of the marquee, but not the large billboard above the marquee is in the “special features” section of the “Psycho” DVD. The Arcadia was hand-picked by Paramount Pictures to be one of the world premiering houses of “Psycho” in 1960, along with theatres in New York, Los Angeles, Chicago, and Boston.

This is an October 1943 photo. The marquee has evolved from the 1930s version.
http://tinyurl.com/l5n2pe

Here is a July 1967 photo from Temple U:
http://tinyurl.com/yzos5pp

Actually the last film to play before renovations was Doctor You’ve Got To Be Kiddiung. They reopened wityh a film in 70mm I think called The General. Two For the Road came after that. That was 43 years ago so my memory could be foggy

Myself, my dad, and my uncles all worked at the Arcadia for the Shapiro family from the late 50’s (dad) through the 60’s and 70’s. Uncle was Al Shulski ; dad Ted Shulski ; myself Ken Shulski. Ben Shapiro and his wife had it during that time. They were related to the family who owned the Sam Eric theaters.

My favorite film at the Arcadia was Breakfast at Tiffany’s. I went to see the film twice. It seemed odd to me that this small theater was equipped with 70mm projection in the 1970s. Yet I saw a Jaws sequel here in 70mm – same smaller screen – but very sharp and clear.