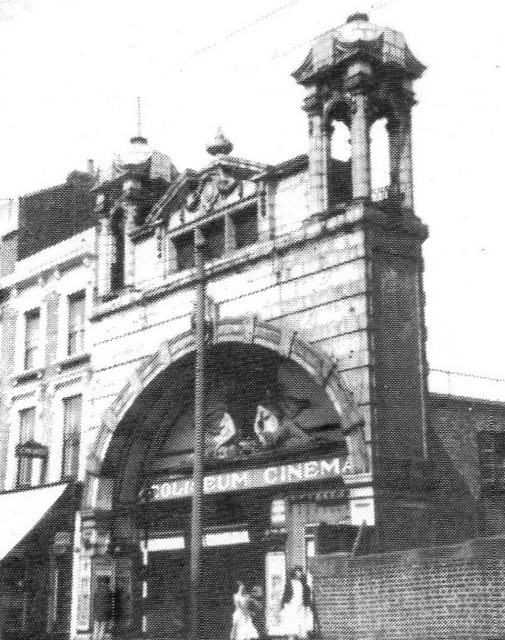 The Coliseum Cinema probably opened in the early-1920’s. It was located on the north-west side of Harrow Road beside the Regent Canal, in the west London district of Paddington.

Always operated as an independent cinema it’s claim to fame came in the 1950 British crime drama film “The Blue Lamp” starring Jack Warner and Dirk Bogarde. Filmed on location around the streets of Paddington and North Kensington, the Coliseum Cinema featured in a major scene in the film when a young crook (Tom Riley) played by Dirk Bogarde attempts a robbery on the cashier of the Coliseum Cinema. Interrupted by (police constable George Dixon) played by Jack Warner, the robbery goes wrong when George Dixon is fatally shot by Tom Riley. The Metropolitan Theatre, Edgware Road also featured in this film.

The Coliseum Cinema closed in 1956 and was later demolished and the site re-developed for a block of flats.

A frame from the film “The Blue Lamp”, showing the Coliseum Cinema in 1949:
View link

In the 50’s (these years were when I was living in Paddington) A feature of the Coliseum was sometimes the Water Rats from the Canal used to pop in to run across the platform in front of the screen. They were just big enough to throw a nice shadow low on the screen. Judging by the odd shriek there were some patrons who were not amused. I saw The Blue Lamp when it was on, myself and my mate Eric. It was a Thriller back then of course.