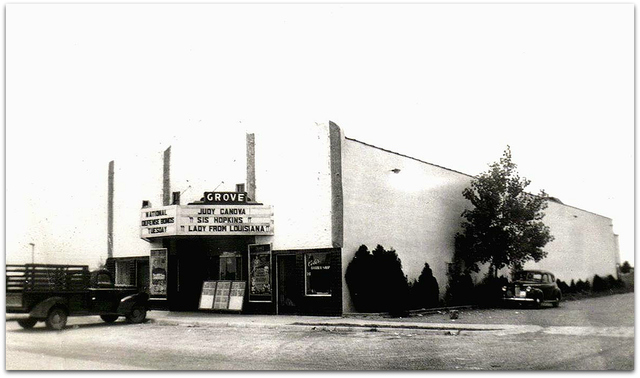 The Grove Theater opened in 1937 in the Dallas community of Pleasant Grove. It was owned by Roy V. Starling. The theater was destroyed by fire on June 21, 1943.

Rare photograph of the Grove in Dallas. (Pleasant Grove)

Various editions of Film Daily Yearbook in the 1940’s and 1950’s list the Grove Theatre located in Pleasant Grove, TX rather than in Dallas, TX.

I don’t know the exact date but Pleasant Grove was a city in itself and annexed on to Dallas. They had their own school district, was an entity in itself. As Dallas grew, small towns annexed on and streets had to be renamed. At the time that my grandfather built the Grove Theater it was Pleasant Grove, TX. So you are right, but it later became Dallas, TX.

Autographed photo to Roy starling and his wife from Ken Maynard. Maynard enjoyed a long and prosperous career with Monogram/Allied Artists that began with silent films. He died in 1974.
www.flickr.com/photos/lastpictureshow/349617399

Group photo of unidentified men holding a “Greater Monogram Pictures” banner. The man in the front row holding the right corner of the banner may possilby have been Roy Starling.
With thanks to Jeannette Davison for permission to post these photos.
www.flickr.com/photos/lastpictureshow/346693449

An old movie theater ad from 1949 for the Grove Theater in Dallas.

This Grove Theater replaced an earlier house of the same name that was destroyed by fire.

From Boxoffice Magazine, November 13, 1943: “DALLAS— P.G. Cameron is watching finishing touches go into his new Grove Theatre at Pleasant Grove, about five miles southeast of here. Chairs which he purchased in several lots over the country, about 500 in all, are being installed. The Grove was destroyed by fire early in the year and permission to rebuild was obtained by Cameron from WPB.”

WPB was the War Production Board, a WWII government agency which controlled access to materials critical to the war effort, including most building materials.

The Grove Theater opened in 1937 and got its name from its subdivision of Dallas known as Pleasant Grove. The Roy Starling property was one of three he owned along with the Urban Theater and Mesquite’s Texan Theater. On May 9, 1942, the Grove was purchased by P.G. Cameron who had the Airway and the Peak Theater at that time while selling his Gateway Theater in Fort Worth. But about a year later, on June 21, 1943, the theater was demolished by a fire.

In November, the Grove was started again in a new building. It was refurbished slightly a year later. Charles Wise bought the theater in 1953. Though he was a vice-president of the Phil Isley theater circuit, he ran the Grove as an independent. A safe burglary in 1956 robbing the theater of $987 occurs toward the end of the theater’s life. In 1958, Wise’s independent is enveloped within the Isley Theater Circuit. The theater was closed on October 23, 1958 with the showings of “Wild Heritage” and “Last of the Fast Guns.” That times out to what was likely a 15-year lease. The property was demolished in 1959 and it replaced that same year by a Wrigley’s Grocery Store.

I remember going to this theatre as a child.