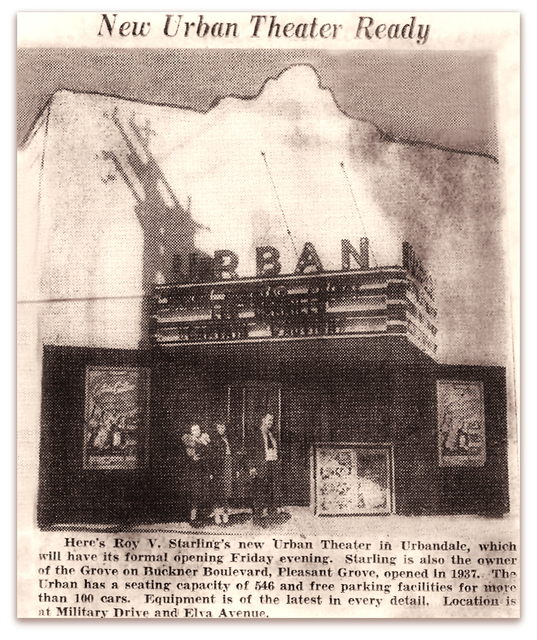 In 1941, Roy V. Starling opened the Urban Theater in the Dallas community of Urbandale.

It was advertised as having 546 seats and free parking for 100 cars.

From My understanding, THe Urban Theatre still stands today as a Washateria. To View the Photo I took back around 1999, go to:

I’m telling you! I’ve NEVER heard of one getting turned into a Washateria before!! LOL!!! It’s still there I do Believe! You can tell by looking at it that it was a Theatre of some sort! I’m wondering why this site is showing it to be demolished.? Bad Info maybe? Oh well..
Hey. Enjoy My photos on Flickr!!
http://www.flickr.com/photos/99859572@N00/

OH!! Was'nt it You that wanted a copy of the Mission in Sulpher Springs a while back? If so, Did I ever send it to you? I can’t remember! Let ME know! And I’ll email one to You… Thanx!!
Randy
RAC

An old movie theater ad from 1949 for the Urban Theater in Dallas.

Rumor is that the Urban Theater closed after allegations of money laundering.

That was the idea. Joe stole my rimshot by posting his Boxoffice item immediately thereunder.

The Urban theater was taken over by Murr Electric for awhile then turned into the washateria. They experienced a 4 alarm fire a few months back. While the building is still standing, it is closed.

After it closed as a theater it was leased to a fine gentleman named Gene Coleman. He opened it after he remodeled the inside with flooring that was suitable for basketball, skating rink, and dancing. He did it for the youth of the area. It was called the Fun Club. Spent many hours there in my youth.

In 1925, Urbandale was annexed in the city of Dallas connected by the Terrell Interurban streetcar line. On January 24, 1941, it got its own movie theater with the opening of the Urban Theater by Roy Starling at its location of 7035 Military Avenue between Elva and Peretta Aves. The theater opened with the film, “Captain Caution.” Starling’s Grove and Urban had personal appearances by the likes of Ken Maynard, the western actor that drew crowds to the suburban second-run theaters.

In May of 1942, Cameron bought Starling’s Grove Theater. That theater would burn down and be rebuilt by Cameron. Cameron next bought the Urban from Starling. This theater would also burn down and be rebuilt by Cameron. The Urban’s destruction came on April 27, 1944 where water rationing hampered firefighters efforts to douse the blaze. Because the fire occurred during the war, building rations delayed the theater’s rebuilding and by the time it had opened, Cameron had sold his Dallas theaters.

The new $60,000 Urban Theater opened a block away across the street from its predecessor at 7106 Military Drive at the corner of what is now Military Parkway and Urban Ave. It opened with “Music for Millions” on July 13, 1945 now in the J.G. Long theater circuit with the Airway, Grove and Urban. The theater served both as a house of worship and functioning movie theater into the 1950s before closing. It was converted into the Urbandale Youth Center that was initially called, the “Fun Club.” The center would eventually be home to the Urban Washateria using the address of 7124 Military Parkway (though at 7120 in tax records) that suffered a major fire on February 28, 2012 that gutted the building.

TO note, this gem of an old theatre was saved after a fire almost totally ruined the structure.. Per 2019.. RAC Photography