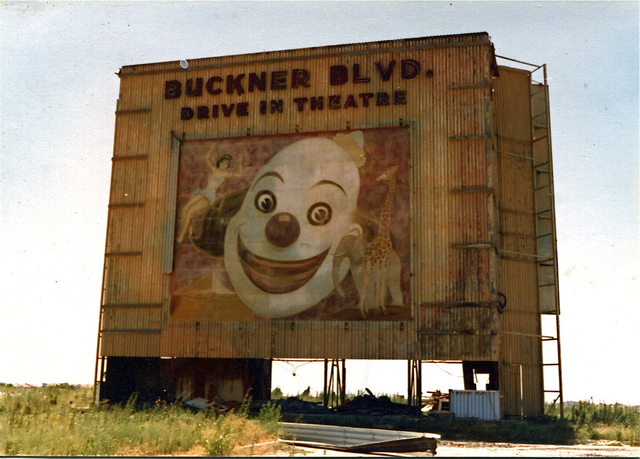 The Buckner Boulevard Drive-In opened on June 4, 1948 with John Wayne in “Tycoon”. It was operated by Claude Ezell and Associates Inc. It was still open in 1960 when it was refurbished.

Love the Clown on the screen building.

The line of cars stacked up on Buckner waiting to get in to this theater when John Wayne movies played would often be past John West Road! Hatari!, McLintock, etc. were big crowd-pleasers back then. Several neighbor families would caravan out here, all of us kids in our PJ’s, and make an evening of it. We’d even play on the playground equipment in our PJ’s, our dads in their light slacks and madras sportshirts on those warm summer nights. Good memories of a good theater.

The Buckner Drive In originally had an animated neon display of a stagecoach and horses. I guess something broke and it was too expensive to repair or maintain. The clown picture was installed probably in the middle or late 50s. Most people are not old enough to remember, but it was really disappointing for me when it was changed.

The Buckner Boulevard Drive-In opened for business June 4, 1948 with “Tycoon” starring John Wayne. You could walk in or drive-in as there was plentiful outdoor seating for the walk-ups. The theater was the third in Dallas within what would be known as the U&E (Underwood and Ezell) and later the Ezell Theater Circuit. That entity already owned the venerable Northwest Highway and Chalk Hill properties in Dallas and other in the state. As the mural suggests, the Buckner not only had movies but had live animals including 15 monkeys to complement the traditional playground equipment including two elephant slides.

The theater was the first in Dallas with individual car speakers. On Easter Sunday 1954, Ezell equipped the Buckner with an 80x40 fiberglass screen — what it billed as the World’s Largest Fiberglass Screen" for CinemsScope and showed “Knights of the Round Table.” It was said to be the first drive-in with three channel multichannel stereo. That system was also created by and added to Ezell’s drive-ins in Corpus Christi, San Antonio, Houston, and Fort Worth.

The McLendon Theater Circuit took over the Buckner Drive-In followed by the Weisenburg Theaters in the 1970s. All bookings and advertising for the Buckner Boulevard Drive-in cease at the end of May (29th) with the great triple feature of “The Pack,” “Mansion of the Doomed,” and “Giant Spider Invasion.” As this would time out to exactly 30 years of operation, that could suggest that a leasing arrangement may spell the end of the Buckner.

“Four theatres (owned by Claude Ezell & Associates) will get complete resurfacing this year, including the Buckner Drive-In here. The Buckner also is to have a complete decoration job on its screen building, concession stand, fences and playground equipment as well as a new clown mural for the face of the building. Work has been completed on two new ramps at the Buckner, adding more than 200 cars to its present capacity and making this theatre one of the largest airers in this city.” — Boxoffice, May 2, 1960

Billboard, Dec. 25, 1954: “Al Reynolds, general manager of Ezell & Associates, has announced that the circuit has purchased … the Buckner Boulevard Drive-In, Dallas, from the Interstate Theater Circuit.”

Those were some great memories. That clown face brings back a smile