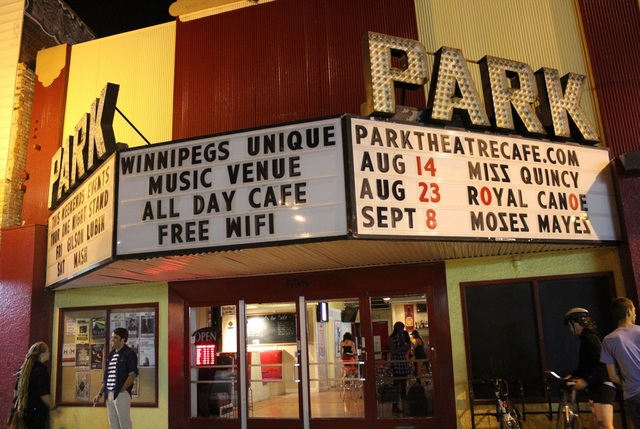 At the turn of the 20th century, a large part of the current Riverview neighbourhood was the setting of River Park . A year-round playground, River Park provided a world-class roller coaster, race track, sports facilities, grass air strip, wildlife enclosures, midway, toboggan slides and picnic places. Countless thousands enjoyed its many attractions, sporting events and leisure activities. It vanished in 1942, after serving Winnipeg’s early citizens for over 40 years.

Within that period, in summer 1914, the historic Park Theatre opened at this location and projected stars from the golden age of cinema for the crowds of the 30s and 40s seeking respite from the war, 50s-era bobby-soxers dreaming of screen idols, and ensuing decades of Winnipeggers looking to be engulfed in the movie experience. It closed in 1986, only to reopen in its current splendour in the summer of 2005.

The Park was purchased in 1930 by Rudolph Besler who immediately upgraded the theatre for talkies. It underwent at least two remodellings during the years while owned by the Beslers. Original seating capacity was 729. The current V shaped marquee has existed at least since the late 1940’s. Under their ownership the Park was an independently run mom & pop venue. Late run double features were shown along with Saturday kids matinees. The Beslers retired in 1965, but the theatre continued to operate until 1986 when it was finally closed. Extensively remodelled and reopened again in 2005 by Erick and Melanie Casselman as a theatre and dessert cafe, the Park now offers a mix of live entertainment along with movie screenings, as well as DVD rentals. It is also available for private bookings.

The exterior of this theatre shows up in the 2007 movie “Blue State.” Ostensibly set in San Francisco, the film was primarily shot in Canada.