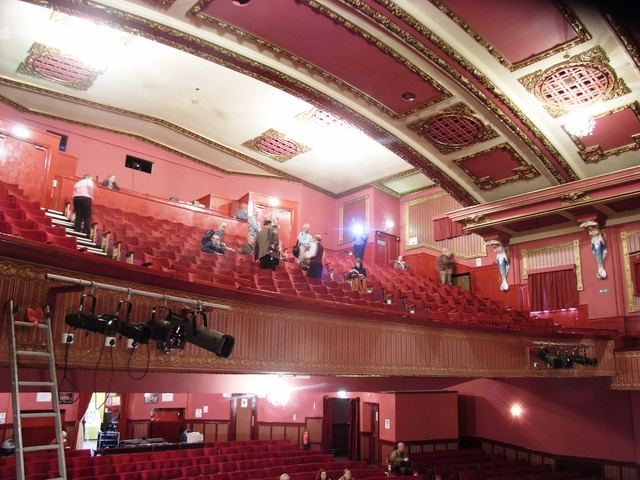 Located in Retford, Nottinghamshire. Opened in October 1927 with a stage production of the musical “No, No Nanette”. The Majestic Theatre was built for both cinema & theatre use. It has seen hard times, but survives today as one of the finest examples of a small town cine-variety theatre in the UK.

It was designed by Alfred J. Thraves and seated 1,200 in 1943, on two levels (stalls and circle) plus six boxes, three on each sidewall. Richly detailed plasterwork abounds around the almost square proscenium arch, the boxes, sidewalls, and the magnificent barrel vaulted ceiling.

In 1986 the Majestic Theatre was subdivided to form a two screen cinema, with the smaller screen beneath the balcony. Periods of closure or bingo usage were frequent, and at one stage the theatre was nearly demolished. Fortunately, a group of locals rallied around and managed to raise the money to buy the property in 1993. Three years later an ongoing restoration programme was begun and today the theatre looks superb, once again returned to a single space, with no traces of the former subdivisions remaining.

The stage is large; there are six dressing rooms and a full height flytower. The proscenium is 30 feet wide. It is used by a mix of amateur companies and professional tours.

The Majestic Theatre is a Grade II Listed building.

A series of photographs taken in 2007 are available.

Some further background taken from “Made in North Notts” (issue 13 November/December 2019, p.52).

Building work began in April 1927, taking six months to complete. It was operated by Cyril Getliffe, who also owned two other Retford cinemas – The Picture House (later the Roxy) and The Palace Theatre. It was built originally to take stage plays and moving pictures. The projectors were converted to sound in 1929. The cinema was sold to Midland Empire Theatres Ltd in 1943. It later became a bingo hall and began screening films again in 1968. It closed in 1983 and was put up for sale for the sum of £48,950. After being purchased in 1986 it became a two-screen cinema but closed again in 1992. The Retford Theatre Trust was established shortly afterwards to raise money to save the building.

One part of the building still has the original 1920s lino running through it and down a flight of stairs.