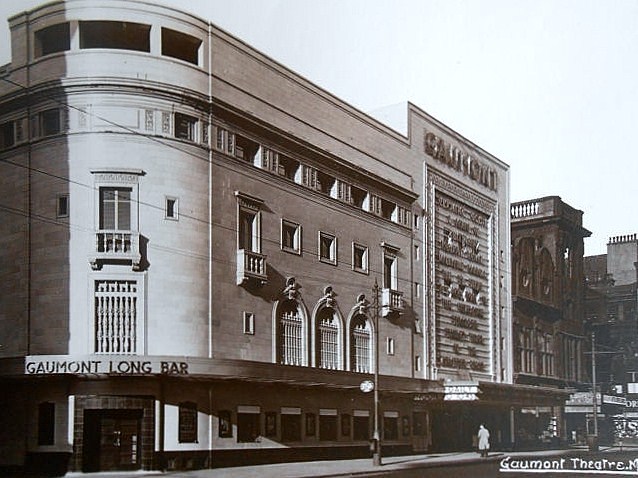 The Gaumont Manchester was conceived, designed and built by the Granada Theatres circuit, but just prior to opening it was sold to Gaumont British Theatres chain and opened (with the Gaumont name) on 21st October 1935 with Robert Donat in “The Thirty-Nine Steps”. It occupied the site (and used small parts of the structure) of the Frank Matcham designed Manchester Hippodrome Theatre, which closed on 2nd March 1935, giving a very busy schedule for the contractors to demolish one and build another in little over six months.

The new cinema was designed by William T. Benslyn and James Morrison with interior design by the famed Russian theatre set designer Theodore Komisarjevsky who designed many theatre interiors for the Granada Theatres circuit. This was a lavish example of his work with a stunning double height entrance foyer lined with mirrors and a grand staircase leading to the circle which had a ‘Hall of Mirrors’ as a foyer. In the basement was a buffet restaurant and 60 foot long licensed bar.

The auditorium had a spectacular coffered ceiling with rich deep plaster, there were three arches on each side wall with gold grille-work, the circle front was curved and fluted, the stage, which was 23 foot deep, had a rectangular proscenium arch framed by pilasters and was 50 foot wide. There were 1,300 seats in the stalls and 1,000 in the circle, all with good sightlines. There was a 4Manual/14Rank Wurlitzer organ with grand piano installed, opened by organist Stanley Tudor and he remained in Manchester until 1953. This was considered one of the best instruments in the UK, and was later moved to the Granada Studios, cared for by the Lancastrian Theatre Organ Trust.

The exterior on Oxford Road was in the Italian Renaissance style and clad in faience tiles. The entrance portion was dominated by one of the largest neon displays in the city, the Gaumont name alone was four foot high, and below this there was a triple bordered panel which could take up to 12 rows of 18 inch letters in red neon announcing the attractions.

This was a highly successful theatre from the start and this continued through into the 1960’s when the Gaumont was used as the roadshow house, screening long seasons of the top films like “South Pacific” (2 years and 2 months from April 1958, just a week after the London premiere), “The Sound of Music” (two years and six months from April 1965).

However, in 1973, the Odeon (former Paramount Theatre) nearly opposite the Gaumont, closed for twinning, reopening on the 25 January 1974 and less than one week later, on the 28 January, the Gaumont closed. It lay boarded up until it was gutted at stalls level and converted into Romanoffs nightclub with a Russian themed interior. This was short lived and it was converted into Rotters Nightclub which opened in the ground and basement levels with the circle area disused and with a false ceiling at front of balcony level. This too closed and in 1990, arguably the finest cinema in Manchester was completely demolished. The site sat empty for several years until an ugly multi-storey car park was built.

The 14 rank Wurlitzer had 4 manuals.

Here’s a photo of the Gaumont Theater above the fake ceiling when the orchestra level was converted into a nightclub. Very similar fate to what happened to the RKO Madison Theater in Ridgewood, NY, and the Varsity Theater in Chicago, Illinois, both in the US.

Vintage photographs of the Gaumont, and its Wurlitzer organ:
http://www.ukwurlitzer.co.cc/2189.html

Here is the full link with extra interior pics of the Gaumont’s conversion to a night club and/or retail.

Everyone seems to be suffering from amnesia with regards to Romanoff’s. I had an office in Canada House, on Chepstow St. The big back windows opened onto the alleyway between the two buildings. From there I watched the beginning of the conversion, including the bricking up of the original stage-door. All of the old interior fittings came out of the scene-dock, and the new fit-out went in the same way. When finished, and fitted out as the Russian themed Romanoff’s night club. I actually got to see inside, when closed to the general public. There is nothing quite so depressing as a theatrical space, of any kind, with just the low-wattage service lighting turned on and all the tackiness all too apparent. Romanoff’s didn’t last long before being restyled, and rebranded as Rotters.