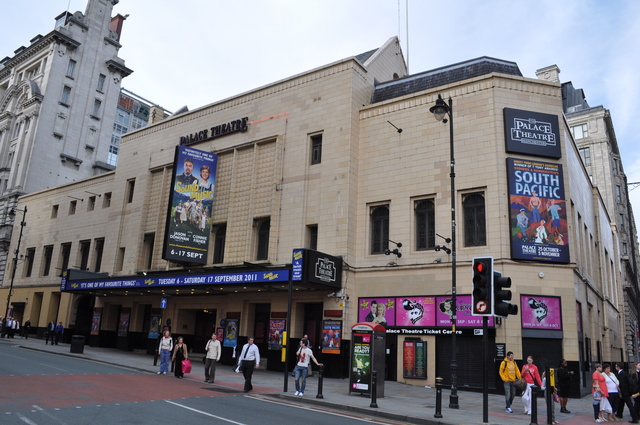 The Manchester Palace Theatre of Varieties opened as a music hall theatre in 1891, with a seating capacity of 3,675. Designed by architects Alfred Darbyshire and F.Bennett Smith in a French-Neo-Grecian style. It was structually altered and redecorated by architect Frank Matcham in 1896. It was during this time that in 1905, a projection box was fitted to enable films to be screened as part of the variety programme. Many top name artistes appeared at the Palace Theatre of Varieties, including;Little Tich, Vesta Tilley, Dan Leno, Marie Lloyd, Geoge Formby Snr. and in 1903 Charlie Chaplin.

The Palace Theatre auditorium was reconstructed in 1913 by architect Bertie Crewe in a Greco-Roman style, the first star in the new theatre was Harry Houdini. Seating is provided in orchestra stalls, dress circle and balcony levels. There are two boxes on each side at dress circle level and above these are another three boxes on each side. The Palace Theatre was operated for many years as part of the Moss Empires Theatres Ltd. chain. The facade of the theatre was covered in cream faiance tiles in 1953, to give the theatre a ‘modern’ appearance, thus covering over the original facade by Alfred Darbyshire.

In 1977, the Palace Theatre was taken over by a new independent operator and it was closed in 1978 for three years to undergo a major overhaul, including a new stage house. Architectural firm Smith & Way were in charge, with Derek Boulton as job architect. It re-opened in 1981 with the Andre Lloyd Webber musical “Jesus Christ Superstar”. Many majot shows from London’s West End play at the Palace Theatre.

In 2008, proposals were being planned to make the Palace Theatre the Northern base for the Royal Opera House, Covent Garden, London. Operated by the Live Nation group for several years, in November 2009, it was taken over by the Ambassador Theatre Group.

The Palace Theatre is designated a Grade II Listed building.

Worth noting that the 1953 repairs to the faÃ§ade (covering it with faÃ¯ence tiles) was intended as a temporary post-war fix which heritage bodies have been eager to reverse for many years. The original windows can be seen peeking through the tiled walls.

What isn’t generally appreciated is that during the 1977 rebuild, by the Cameron Mackintosh organisation, the ‘new stage-house,’ mentioned by Ken Roe, was actually extended across the rear, service alleyway and into the structure of the building at the rear, Bridgewater House. This provided a much deeper stage, enlarged production facilities and higher fly-tower. As the attached photo shows, this extension was carried out so that, externally, it does not appear to be part of the theatre. When the plans were first submitted, there was much discussion about altered sight-lines. It was questioned as to whether those patrons seated in ‘The Gods’ would actually be able to see to the back of the stage. In fact, if the full depth of the stage is utilised, they can’t; but this is rarely an issue.