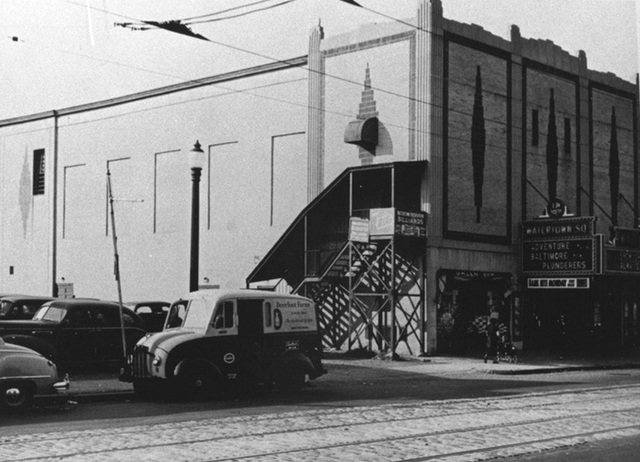 The Watertown Square Theatre was a local cinema located on Galen Street on the west side of Watertown Square, to the west of downtown Boston. It was at one time operated by E.M. Loew’s Theatres. Further information welcomed.

The Watertown Square Theatre in Watertown was included in the MGM Theatre Photograph and Report project. There is an exterior photo dated May 1941. The theatre had an impressive facade with decorative brick patterns (I seem to recall that it was yellow or cream brick). A store, the Galen Spa, occupies the left bay, and the center and right bays contain the theatre entrance. There was a rectangular marquee with “Watertown Square” on the front. Attractions posted, in white letters on a dark background, are “Four Sisters” and “Caught in the Act”. There are 3 or 4 pairs of double doors below. Across from the right side of the building seems to be an old diner. The theatre was across from the trolley carbarn in Watertown Sq. The Report states that the theatre has been playing MGM films for over 10 years; that it’s over 15 years old; is in Good condition and has 640 seats. (It appears to be a much larger theatre, with many more seats than that). The 1927 Film Daily Yearbook lists a Strand Theatre in Watertown with 600 seats – is it this theatre?? In the 1942-43 Motion Picture Almanac, the Watertown Square Theatre is listed as belonging to the E.M. Loew theatre circuit.

Is this the theater?
http://tinyurl.com/2oglhp

Yes, that is definitely the Watertown Square Th., minus its fancy marquee.

After it closed as a theatre, a one time occupant was Pike Productions, They were a film production company that made trailers and other film projects.Now the building is replaced with condos.