Opened on November 23, 1929 with Tom Moore & Owen Moore in “Side Street”. Operated by the Bloomer Amusement Corporation (B-A-C Theatres), the Midway Theatre originally could seat 400 in its auditorium and balcony, and presented first-run sound movies.

When it first opened, the Midway Theatre featured ‘bargain’ ticket prices, at 20 cents, to compete with the nearby Lincoln Theatre’s higher admission prices. On December 19, 1930 it was renamed Ritz Theatre.

The Ritz Theatre was completely remodeled and enlarged to 1,000 seats in January 1946. It was remodeled in the Art Moderne style, reopening with the film, “Christimas In Connecticut” starring Barabara Stanwyck.

The balcony was sealed off in 1971 and became a second auditorium which opened on April 21, 1972. This in turn was halved a decade later. Seating was also reduced in the main auditorium to around 400.

In 1990, BAC sold the Ritz Theatre to the Kerasotes chain, which screened second-run double features in the main auditorium and art films in the set of balcony screens, calling them ‘The Ritz Upstairs’.

This arrangement proved unsuccessful, and only lasted a short time.

The owner of the neighboring Lincoln Theatre purchased the Ritz Theatre from Kerasotes in 1997, but it would only remain open under this management briefly.

In 2000, the Ritz Theatre was converted into a church.

Parking, or lack of it, was the downfall of the Ritz. The theatre is at the far east end of downtown Belleville and never had a real easy place for customers to park. It is a shame this beautiful theatre has gone dark – it was/is beautiful and my very first job at 16 y.o. Before long, I became the Asst. Manager/Projectionist and had some of the best years of my life there! After cutting the balcony into two seperate but small theatres, the seating capasity for the main auditorium was about 375. The two screens “upstairs” sat 175 and 80 respectively. I certainly can remember when the Ritz could sell-out all three screens! Although it was said the theatre was haunted, I have to say I never saw any such activity – all I saw and remember are the best times of my life! At least the Ritz hasn’t been torn down and lives now as a church!

There is a current photo on the church site. Go to www.faithbaptist-church.org and click “about”.

i work at the ritz too went it closed! julie was the manager. yeah people said it was haunted. very creepy during closing time

Below is a link to story about haunted history of the Ritz Theatre:

When the church moved into the old theater, a bar owner purchased the huge cursive RITZ sign and intended to place it on the facade of his bar on Washington Avenue in nearby St. Louis. This never came to pass, and the Ritz bar went out of business. I wonder where that sign wound up!

One of the earliest movies I saw here was “One Magic Christmas”…and other memorable movies included “The Little Mermaid,” “Prancer” and “Ghosts of Mississippi.”

I’ll never forget seeing “Ghostbusters II” in one of the upstairs screening rooms. In this particular room, the projector beamed onto a mirror (at the rear right corner of the room) that then beamed onto the screen. On this particular day, the projector malfunctioned and began to reverse the film at double speed. Momentarily, an usher came out to announce that the screening would be cancelled due to the malfunction and we were all issued rain checks. I didn’t see the movie in its entirety until it screened second-run at the Lincoln months later.

This was the Midway theatre, which was renamed the Ritz theatre on December 19th, 1930. First ad posted. 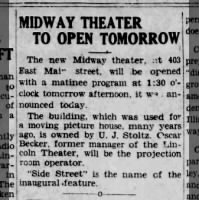