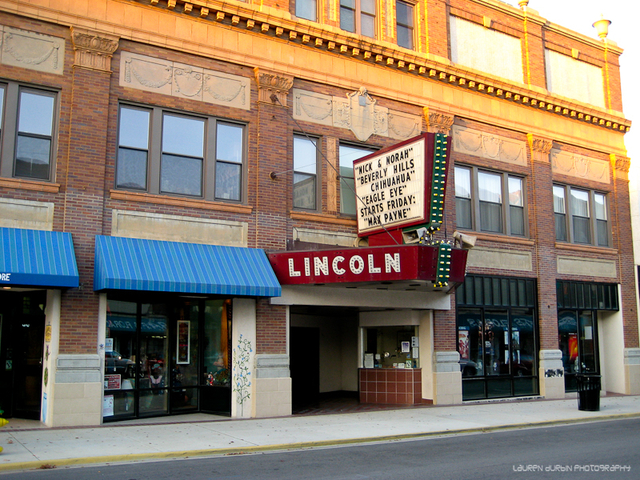 Opened on October 6, 1921, the Lincoln Theatre sits on the site of the 19th century Mansion House Hotel/Voss Building.

Originally seating 1,800, the large and ornate Lincoln Theatre cost about $50,000 to construct.

It opened with a movie “The Old Nest” starring T.D. Crittenden, four vaudeville acts, and a live orchestra.

During the 1920’s, such stars as a young Ginger Rogers and the Marx Brothers performed live on stage. By this time, the Lincoln Theatre was billed as the greatest vaudeville house in southern Illinois.

A $30,000 Wurlitzer organ was purchased for the theatre in 1927. The Lincoln Theatre switched from silent to sound films in early-1929.

In 1931, the Lincoln Theatre became part of the Fox Midwest chain, and six years later, a large chandelier was installed in the auditorium.

When CinemaScope came to the Lincoln Theatre in 1953 with Richard Burton in “The Robe”, the lower half of the chandelier was removed because it cast a shadow across the newly installed screen. Around this time, the Wurlitzer organ was removed, as well, having long been disused.

National General ran the Lincoln Theatre in the 1950’s, and a decade later, Mann Theatres began operating the movie house. In 1980, it was acquired by Richard Wright, who has been painstakingly restoring and renovating the great old theatre ever since.

The balcony was converted into twin auditoriums, and seating on the main floor was vastly reduced to 584, for modern-day audiences accustomed to more legroom.

In 1988, Wright added a new vertical marquee, replacing one that was damaged by a storm a few years earlier.

A new pipe organ was installed in 1996, the same year the Lincoln Theatre celebrated its 75th anniversary, with an gala concert.

After many years of screening second-run fare, the Lincoln Theatre recently returned to a first-run policy.

In addition to movies, the theatre also hosts live performances, including children’s theatre, concerts and is the home of the Belleville Philharmonic.

The architect of the Lincoln Theatre was William Henry Gruen.

Even though it opened as the Lincoln, the original plan was to name it the ARCADE.

1969 photo added via Arnold Fusco. Original marquee with vertical sign, and hanging letters instead of clear plastic as now.

An interesting temporary use for the theatre during COVID.

The Lincoln is within walking distance of the courthouse and Courthouse Square (which is actually a roundabout circle).