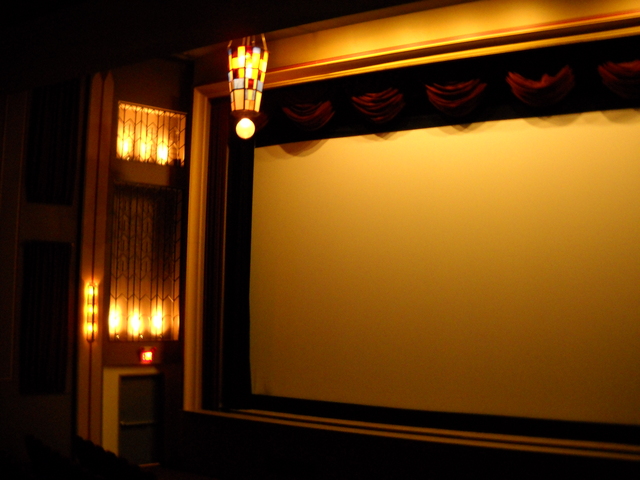 Designed by the famed architectural firm of Rapp & Rapp, the Birmingham Theatre opened in late-1926.

It was built for the Kunsky circuit, who opened two other nearby theatres that same year, the Redford Theatre and the Royal Oak Theatre. The theatre’s construction was delayed over a year because of the widening of Woodward Avenue.

Like most of the Rapp & Rapp theatres, it was designed originally in the style of the French Renaissance, and sat over 1,250 in its auditorium.

It once contained a Barton organ and featured vaudeville in addition to movies.

By the 1960’s, it was showing second-run fare, and when it was purchased by the United Detroit Theatres chain later in that decade, it was given a drastic modernization inside, ridding it of all traces of the original décor, though its façade remained intact.

Later in the 1970’s, the Birmingham Development Company took over operation of the theatre, and remodeled it at a cost of $750,000 adding new seats, curtains, lighting and sound equipment to feature live stage shows in addition to continuing to screen movies.

In 1979, the Birmingham Theatre was leased to the Nederlander Theatrical Corporation and Broadway productions were staged there for several years.

In the late-1980’s, the Birmingham was carved up into eight small screens and returned to showing first-run features. It was taken over by Emagine Entertainment on February 22, 2021.

I remember attending one of the live plays around 1982, a quite good production of “Deathtrap” starring David McCallum. It’s good that this theater was preserved, and even better that it doggedly continues to reserve a few of its screens for independent and foreign films, one of only 3 commercial Detroit-area venues to do so. The largest auditorium, used for standard first-run films, incorporates much of the original theater auditorium; it is spacious and has a lovely chandelier and period decor. The smaller rooms, however, are far less pleasant Not much can be done about small size and unfortunate geometry, but the owners should consider equipping them with modern sound systems. In 2002 a glitzy modern multiplex opened a few blocks away offering stadium auditoriums, some of which serve food and alcohol right at your seat — catnip for Michiganders. My wife and I continue to patronize the Birmingham whenever we can, praying that it survives the competition.

If you like the Birmingham Theatre, you must visit the Birmingham Palladium. Its run by the same management, and was built just down Woodward. It is definitley my favorite place to see a new movie. I suggest the dinner and a movie package, in the “PEA” which stands for Premier Entertainment Auditiorium.

Suprizingly this theater is owned by Mike Illitch, the one who owns the United Arists and Adams, and lets them sit and rot.

Although I never had the opportunity to see the Birmingham in its original single screen format, I was pleasantly surprised to learn and see that a considerable amount of effort was made to retain most of the signature characteristics of the initial design when it was reconfigured as a multiplex. Interior and exterior photos from 2010:
1, 2, 3

They say it is haunted. Any comments about that?

This theater was prominently featured on an episode of “House Hunters” on the HGTV network.

This theater was purchased by Emagine Theaters on February 2, 2021. They will reopen it officially as an Emagine Theater on June 15, 2021, giving Emagine two theaters in downtown Birmingham, MI

Theatre is doing well. As kids we would spend Saturday watching two or three movies at a time, either there or down the street at the Bloomfield with the Studio 4 across the street (Now being demolished) We used to hang out on the porches of the houses next which were than converted and used for offices until they were demolished in the early 1980s. I clearly remember the large grille on the ceiling but as per an earlier post in the 1990s when the building was completely gutted and subdivided into theatres of several sizes. During this reconstruction I looked inside and there was nothing there, just a big open space. I went there only one time around 1980 to see a play with my parents and remember reading that it closed not because of a lack of business but because the owners were not able to book enough acts to keep it going.