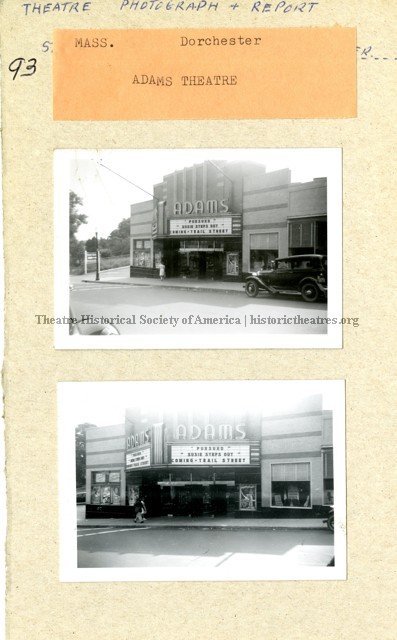 The Adams Theatre was a popular neighborhood theatre in Dorchester. It also drew patronage from North Quincy and Milton. It lasted well into the 1960’s.

The Adams in Dorchester was included in the MGM Theatre Photograph and Report project, but no one filled out the form. There is an undated photo of the exterior. Judging from an old 1920s car in the photo, it may have been taken in 1941 when most of the other photos in the project were made. Attractions on the marquee are: “Pursued”, “Susie Steps Out”, and coming next “Trail Street”. Do those 3 movies date from 1941? The entrance was in the center, with commercial space on either side. The building was one story high, but the facade had a false front which extended upward. There was a triangular marquee. The Adams sat on the west side of Adams Street a short distance to the north of the intersection with Gallivan Boulevard. Many times in the 1960s, when driving north in the early evening on Granite Avenue from East Milton and stopping at the traffic lights at Gallivan Blvd, I could see the Adams Theatre straight ahead across the intersection. The cheerful pink and white marquee was very inviting, but I never went into it. I believe that it was constructed in the late-1930s and had about 900 – 1000 seats, all on one floor.

Thank you, Billy, for looking up the year that those 3 movies were released. The MGM Report photo was therefore snapped in 1948.

The best thing about the Adams Theatre was that on certain nights they would give out free dishes. I remember my sister would take me with her to the movies so she could get and extra set free. If I remember right they were a dark green with a white edge.

Claire- what you describe was known as “Dish Night”. Movie theaters which participated in this incentive usually held one “Dish Night” per week. Do you remember anything about what the Adams Theater looked like on the inside?

Here is a link to an artist’s rendering of the Adams Theatre on the cover of a matchbook:

The matchbook picture shows that the Adams was a Streamline Modern style theater. I found a Facebook comment by a user from Dorchester who says she remembers seeing the Adams Theatre built and seeing it torn down, though she doesn’t say what years those were. She also remembers seeing “Now, Voyager” and “Gone With the Wind” at the Adams. My guess would be that the house was probably built in the late 1930s, and certainly no later than 1940.

I remember my mother taking me and my sister to the Adams starting around 1946. I remember seeing a Lassie movie with Jeanette MacDonald. Also saw Disney,s Cinderella. The Adams wasw always the 1st Dorchester to show Disney after downtown Boston. We lived closer to the Dorchester(DOT) and Fields Corner theatres so going to Neponset to the Adams was a little hike.we lived at 310 Adams so it was only 4 ½ Longggggg blocks.

Growing up on Adam St next to the Cosgroves milk plant we only went to the Adams a few times because it was a long walk to the other end of the Neponset section. If my memory treats me right I believe the Adams was built and opened in the early 40’s. It was a four wall cement block theatre. Wide and medium deep. Big screen. Very clean and well kept. Not overly decorated but pleasant enough and not ornate like the Fields Corner or a dump like the Dot. Admission was 15cents for matinees and 25 cents nites. Had dish night like the Dot one night a week. My mother used to go. Dish nite at the Dot was Mondays so the Adams must have been on a different night. Was a 2nd run like the Fields Corner.

On the back of a large old mirror that my wife bought in Maine were two (of the same) theatre posters from “ADAMS” that appear to have been in place since 1946- not a Picasso but still a nice find. The printer was Buck Printing Boston (still in business) so I assume the posters were for the Dorchester theatre.