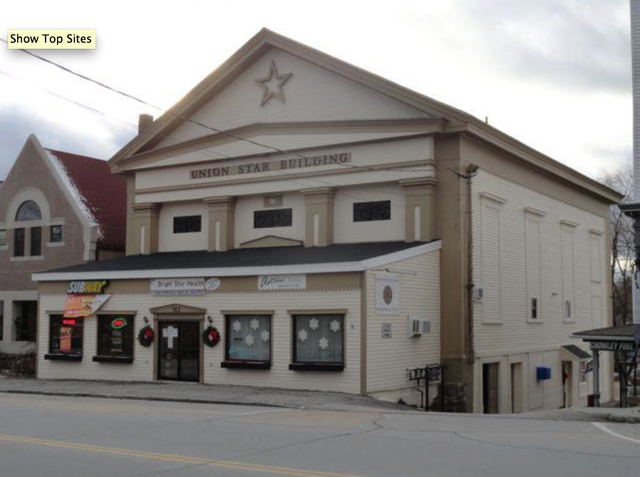 The Star Theatre was a local movie theatre in North Brookfield, to the north of Sturbridge. It may have been an adaptation of an older building. Further information welcomed.

The Star in North Brookfield was included in the MGM Theatre Photograph and Report project. There is an exterior photo dated May 1941. The building had a distinctive facade like a Greek temple, with 4 columns across the front and a triangular pediment above. There were 3 tall entry doors. There was no marquee but there were poster cases on each side of the center entrance, plus very large portable poster boards set out on each corner of the front. A couple of steps led up from the sidewalk to the front doors. This facade suggests a building designed for other purposes and then adapted as a local movie theatre. The Report states that the Star is not a MGM customer, that it’s overe 15 years old, and in Fir condition, and has 680 seats. There were no other movies in town, and the 1940 population of N. Brookfield was 3,300.

Someone Who Was There tells me that he was in North Brookfield very recently and the Star Theatre building is still there and has not been demolished. He believes that movies there may have lasted into the 1950s. The building has a 1840s build date on it. The Star Theatre’s big tin star which hung over the center entrance is still there and has not been removed by the present occupants.

The Star in N. Brookfield is listed in the 1927 Film Daily Yearbook as having 580 seats and open 4 days/week.

My Father started the Star—I don’t see any recent comments, so assume it’s no longer an interesting issue—

Reverend Libby told me the history of the star theater it started out as the abolitionist church in protest against slavery.after the Civil War the church closed and eventually changed hands and has been on a movie theater I doctors office pizza parlorA furniture store rural housing improvement office a florist and probably sat empty in between here and there

Bella95m - my mother and her sister, now 89 and 92 years old, worked at the Star Theatre as teenagers in the late 1940’s. I would love to talk to you about the Star.