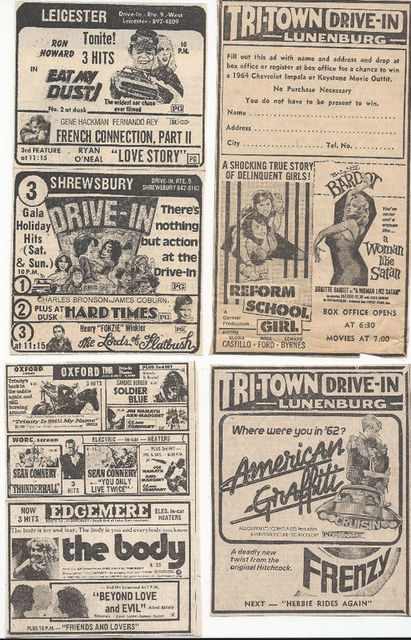 The Leicester Drive-In opened in 1967. A second screen was added around 1995. It had become a triple screen theatre by 2004. I shot videotape of it back in 1991. It was open then and it is still open now, but was temporary closed in 2021 due to the Covid-19 pandemic.

PLEASE CHANGE ADDRESS, IT DOES NOT WORK, IT WILL WORK IF YOU REMOVE:

The drive-in had over 800 autos the night it opened.

The official website is defunct. The Leiceste opened in 1967, and the third screen was added in 2004.

DI will have a 2015 season. Only one screen opening weekend. 2nd screen to be used later in season. No details if 3rd screen will be used for 2015.

Hanna Joseph built the Robin Hood Drive-In restaurant in the 1960s. In 1967, he built the Leicester on adjoining property. The Worcester Telegram said in August 2017 that his daughter Maria Joseph, who still owns the theater, was reopening the restaurant as Joe’s Drive-In.

On the last week of its 2017 season, the Leicester used all three screens, although only Screen One is digital. Yet they were able to show Dunkirk, Wonder Woman, Transformers: The Last Knight, and Baywatch on the film-only screens. I didn’t think there were that many 2017 movies still on film.

And its web site and Facebook page are both active as I type.

If I interpret the photos at HistoricAerials.com correctly, the Leicester added its second screen in the southeast corner of the main viewing area between 1995 and 1997. Then the third screen, which required carving out a whole new viewing area to the south, came in between 2001 and 2003.

As of July, 2018, all three screens were in action. Screen 1 (HOTEL TRANSYLVANIA 3, INCREDIBLES 2) was digital, MISSION: IMPOSSIBLE—FALLOUT and A QUIET PLACE were screening in 35mm on screen 2, and E.T. and JAWS were screening on screen 3 (presumably 35mm, but unconfirmed) the night I attended.

It is with great disappointment that we will not be open this 2021 season due to strains that Covid has placed on us. We will miss you all and the bustling that makes our every summer! Please keep being safe and careful.

We will be looking forward to seeing everyone in Summer 2022!

Dave Lounder THE DRIVE-IN THEATRE PRESERVATION SOCIETY TheDriveInGuys.com on May 22, 2022 at 12:10 am

Does anyone have any info. re. the latest status / future of the theatre?