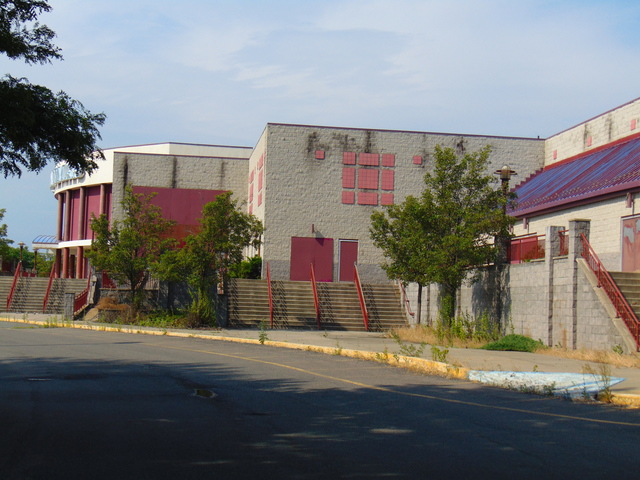 A very nice showcase cinema. This theater is always friendly and clean. They have beautiful neon wall art. The only negatives are some chatty teenagers on the weekends and too many steps to get in, like climbing a mountain sometimes, but in general a overall good movie going experience every time. Too bad the word is that this theater may shutdown like the theater in East Hartford, it is just too close to their theater in Enfield, which now has a digital projector and may expand to 14. Maybe even become a Showcase deluxe. East Windsor is just too small to support this theater.– tom

Went here the first weekend it opened for Star Trek Generations. Seen many movies here before moving to another part of the state. The rumor is true that it is shutting down on Sunday after the last show. Might show up at the last show there like I did with EH.

The closure on March 2 has been confirmed by the Hartford Courant – the theater which opened in 1994 had since been updated with stadium seating. It was a very nice operation. It’s roughly the same layout as Berlin which upgraded its snack bar to offer an expanded menu a few years ago. This one was the of the traditional popcorn/candy concession variety. The theater consisted of two big theaters on opposite ends, next to those medium sized theaters, and sandwiched in between those 8 smallish theaters (150 seats or so). The retrofit was nice, and the screens were a really great size, and the theater was well kept. National never ran their theaters into the ground, and this was a first class operation.

They are shifting their focus on the Cinema De Lux/Showcase in Buckland and Enfield I suppose, although in my experience Enfield didn’t draw huge crowds either – perhaps they are consolidating the audience as the two were close together. As Tomas Kent points out they may consider making Enfield a Cinema De Lux – which I’m quite surprised they haven’t done in West Springfield – all they need to complete that is a Chatters and a director’s hall or two. My guess is they are waiting to gauge the reaction to the Lux Level concept before they move ahead with any upgrade. Enfield thought doesn’t seem like an upscale enough place to do it though – just judging by the stores in the mall. West Springfield though is a cinema with an interesting history with a strong culture of dedicated showcase moviegoers.

I love the neon in the lobby of this theater. I wonder what will become of it after closure?

When it opened it was one of the best places to go, and when I went there for the last time last year for a pre-release screening it still seemed very well run. Their Enfield Cinema may have improved under their ownership, but when it was a Hoyts it was notorious for being crappy.

This opened on November 18th, 1994. Grand opening ad in the photo section.

Anyone know how to contact nnationalim a beginner photographer and historian and would like to take pics of this one and the one in east Hartford.

Currently being demolished for Mohegan Sun. I’m not sure if it has been finished yet. (I live about a hour away) And for Collegeguy1342, I’ve taken photos of both.