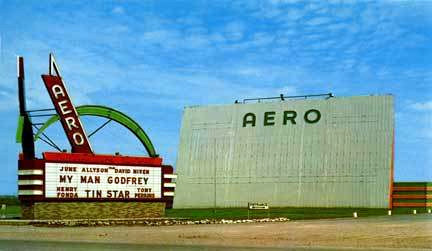 Opened July 1, 1950 with John Payne in “Captain China” & Eddie Albert in “The Dude Goes West”. The Aero Drive-In was in the Cheektowaga district of Buffalo at 3755 Union Road. It closed in 1971 and was torn down to make way for the Holiday 6 Theatres, which was initially a Cinerama twin, with a smaller outlying building containing four screens. It closed in summer of 1995.

The Aero Drive-in opened on July 1, 1950. Its final season was 1971, after which it was torn down to make room for the Holiday 3,4,5,6 Theatres. Holiday 1 & 2 were opened while the Aero Drive-in was still operating, and were so successful that the owners decided to build 4 more screens where the drive-in was, in order to have more indoor screens. The owner of the Aero Drive-in also owned the nearby Buffalo Drive-in and Twin Drive-in, so they may have wanted to sacrifice one of their outdoor screens to increase their number of indoor screens. The concession stand for the Aero Drive-in is still standing, and has been used as a restaurant over the years, most recently as a Bucca De Beppo’s. The Holiday Theatres are now all gone, as are the Buffalo and Twin Drive-ins.

Opened on 1/7/1950 with “Captain China” and “The dude goes west”. Demolished(date unknown?). The site is now a restaurant(Holiday Showcase) and a shopping centre(Consumer Square Plaza). The entrance road is still there used as the entrance to the shopping centre.