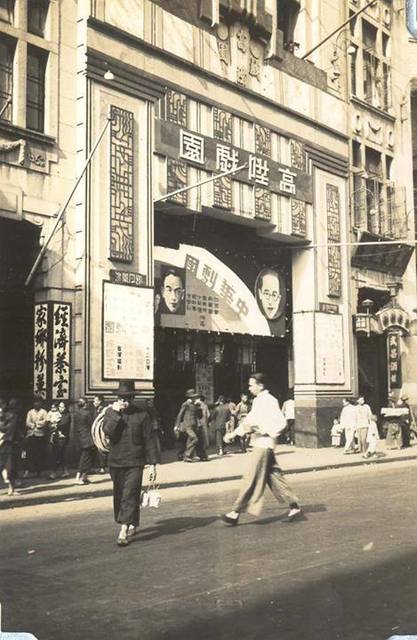 The Ko Shing Theatre was situated in the Western district on the Hong Kong Island.
Ko Shing, meaning “step by step upwards”, was the Cantonese pronunciation of its Chinese name.

The theatre was built at an unknown date before 21st December 1878. It was a venue for Cantonese operas as well as social gatherings. On 17th February 1906, the visiting Prince Arthur of Connaught was received at the theatre by the Chinese community, and the theatre had been transformed into a typically Chinese banquetting hall.

According to news reports, the entertainment given by the Chinese community in honour of the visiting Duke and Duchess of Connaught and Princess Patricia on 9th February 1907, took the form of a tea party and theatrical representation at the Ko Shing Theatre.
A series of comic and instructive films were thrown on the screen on 22nd July 1909 by the American Cinematograph Company before a Chinese audience at the theatre.

The proprietor of the theatre was fined a few times for allowing obstructions in the gangway of the auditorium and shutting tight the exits.

It was demolished in April 1927 for being an unsafe structure.

It opened to business on 30th July 1928.
In November 1929, radio relaying system was installed at the theatre. The performances at the theatre were relayed on the radio from time to time. Before and after WWII, it was an important venue for Cantonese operas and selected films were shown when there was no performance.

In May 1931, renowned Peking opera actor Mei Lan-Fang performed at the theatre.
During the war years,the theatre was in business, and only Cantonese operas approved by the Japanese Armed Forces could be performed.

The theatre re-opened at an unknown date after the end of WWII. On 1st March 1947, a bomb exploded during a night performance at the theatre, 26 persons were wounded and one died as a result.
After an extensive renovation in 1960, air-conditioning was installed, the stage was enlarged, a new screen was added,and the seats were replaced.

It began showing screen advertisement from 13th July 1960 onwards. The anniversary celebrations of the People’s
Republic of China were held at the theatre in 1960, 1961 and 1962. From 1960 until its closure on 16th March 1972, it showed first run Chinese dialect films, and Cantonese operas were always performed.

During the war years,the theatre opened to business after the suspension of electricity supply on 20th August,1944.The exact date of its closure remains unknown.

The theatre served as a venue for Cantonese operas during the war years.

The renowned Peking opera actor Mei lan-Fang performed at the theatre from 7th May,1931 to 11th May,1931.

There was a restaurant in the front part of the rebuilt Ko Shing Theatre.

In March 1945, a casino opened in the theatre building of the Ko Shing Theatre. The casino closed after the end of the war.