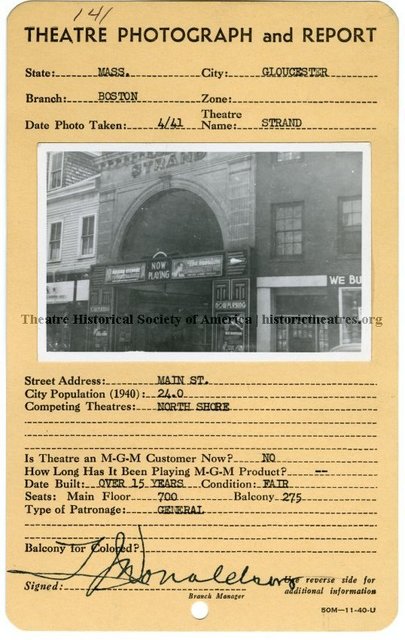 The Strand Theatre was one of two traditional movie theatres on Main Street in downtown Gloucester during the 1940-1950 era. It was at one time part of the Levenson theatre circuit of Boston a.k.a. Strand Theaters.

The Strand was included in the MGM Theatre Photograph and Report project. There is an exterior photo dated April 1941. It had a fancy 2-story entrance with a large arch, with “Strand” printed at the top just below the cornice. There was no marquee but there were poster cases at street level and horizontal poster boards above the entrance. The Report states that the Strand is not showing MGM films, that it was built over 15 years ago and is in Fair condition, and has 700 seats on the main floor and 275 in the balcony, total: 975 seats (not 925 as above). It was part of Levenson circuit at one time. I recall this theatre in the late-1940s and early-1950s, but don’t remember if I ever went into it. It was on Main Street downtown but I don’t recall if it was on the same side as the North Shore Theatre, or on the opposite side.

The Strand in Gloucester is listed in the 1927 Film Daily Yearbook as having 860 seats.

The address was given in Cinematour as 73 Main Street.