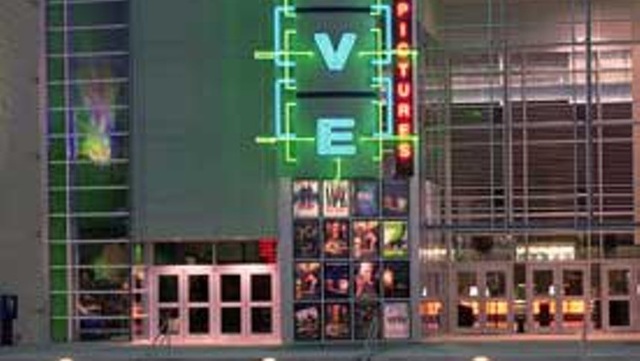 Opened by Rave Motion Picture Theatres on December 21 2000. It was taken over by Carmike Cinemas in June 2013. AMC were the last operator when it was closed on March 17, 2020 due to the Covid-19 Pandemic. It was announced on July 16 2020 that the theatre was be closed permanently. It became the Thousand Hills church.

For Dallas-based Rave Motion Pictures, the December 2000 opening of the Rave Hickory Creek 16 was exciting. It was the company’s first theater and located in their corporate backyard. The $12 million, 60,000 square foot property was well-positioned against the nearby UA/Regal Lakepoint Lewisville to the South and the Golden Triangle locations just to the North in Denton with the chain entering bankruptcy and years ahead of Cinemark’s refurbishing of its nearby Vista Ridge Mall to the South or the Denton ‘plex which would be built to the North almost five years later. The Cal Young architected theater was visually stunning upon its opening. Young’s modernistic architecture design was one of six winners of the 2001 National Concrete Masonry Association (NCMA) Design Awards of Excellence program. Its auditoriums ranged from 100 to 300 seats.

Launching on December 21, 2000 with free admission to any movie Thursday in exchange for a donation of two cans of nonperishable food, the theater’s regular first-run policy began the next day. The theater chain would be aggressive in moving away from celluloid film and to digital projection well ahead of the competition. In 2005, Rave was the first to enter into the Real-D 3D era with exclusive North Texas screenings at its then three area theaters for 3D films including “Chicken Little” making it a focal point for 3D fans.

The Rave had its technology and architectural advantages going for it. People would drive past older, aged properties from all directions to get to the Rave. Regal would shutter its UA Golden Triangle theaters in Denton just to the North on October 13, 2003 making the Rave a destination point for then theater-less Denton. It would outlast Regal’s UA Lakepoint which would shutter just to the South. But the competition wasn’t rolling over. Cinemark would revitalize its aged Vista Ridge property and retain its nearby discount house to the South while building a megaplex in Denton just a few exits to the North. Studio Movie Grill would take on the Lakepoint as a dine and movie locale. And seven miles away to the West and South, AMC would enter the outer periphery of the Rave’s footprint with its Highland Village theater.

Rave’s aggressive move in 2009 to take on Showcase Cinemas to boost it to the fifth largest operator in the U.S. was short-lived as Cinemark would purchase 32 of the chain’s 35 theaters including the Hickory Creek on November 30, 2012. Obviously with four properties within exits of each other (the Vista Ridge Mall 15 Lewisville, the Lewisville 8 discount house, Cinemark 14 in Denton and the Rave Hickory Creek 16), something had to give. On July 18, 2013, Carmike would acquire the Hickory Creek property along with two other theaters in Louisville, KY and Voorhees, NJ. The Carmike Hickory Creek 16 continued operations with its new Carmike signage as pictured into the 2010s.

No grand opening published in the Morning News on December 21st, 2000.

Could AMC close down their classic theaters if they file for bankruptcy? They have underperformed vs the regular AMCs as well as the Dine Ins.

On March 17, 2020, AMC closed its Classic Hickory Creek 16 along with all other theatres in its chain due to the COVID-19 pandemic. With the lease coming due, AMC announced that the closure was permanent on July 16, 2020. It was one of many theatres closed permanently during the pandemic.