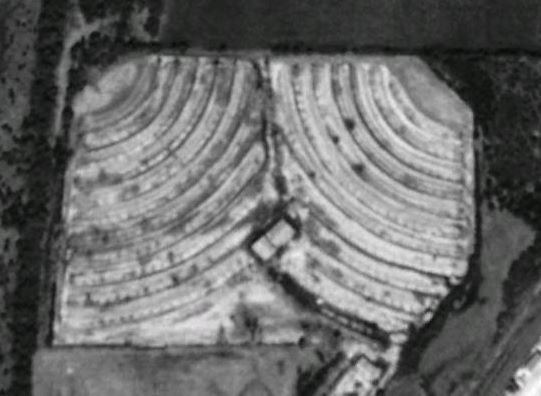 The Sher Den Twin was opened in December, 1969 by Robb & Rowley.
It was located on Gallager Road between Denison and Sherman to replace the Perrin Drive In, which was demolished to make way for the Sher-Den Mall, which has also been demolished.
The Sher Den lasted fifteen years being closed in 1985, and the twin
screens came down in 1987.
The Marquee and snack bar were torn down for a new Dillingham school
in 1997 after a decade of falling apart and down.

My parents managed the drive-in from 1973-1986 and I helped my dad put those letters on the marquee. We literally lived in the projection booth for a few years after a house fire. I was at that drive-in practically every day from 1973 until it closed in 1986.

I come from a long line of theatre managers from the Rowley era. My grandfather (Harold Gassaway) moved from Corpus to Sherman in the 50’s and managed the Texas downtown and the Perrin Drive in. After they closed the Perrin to build Sher-Den mall they soon closed the Texas theatre. Whose Marquee is hanging in the main hall of the Texas History museum in Austin. Any who…..back to the story. While my grandfather was still managing the Texas, my grandmother (Jeanette Gassaway) was the assistant manager and my mother worked in the ticket booth. My mother met my father who soon got the job as projectionist and was mentored by a union operator name Golden Gentry. Golden would work the booth in his underwear and treated the booth as his own apartment. When United Artists purchased Rowley they did away with the union projectionists and that thrust my father into full time projection duties. My father went from running changeovers and rewinding reels to seeing the birth of the Christie 3 platter system.

I was very young when I was taught how to thread a projector. I still had to lift 60 min. reels up onto the spindles via stools and dowser handles. I remember making up and threading Star Wars for the 1979 re-release. I watched Star Wars twice a night for almost a year and thus I was brainwashed for eternity that Star Wars is the greatest film of all time.

I was so used to watching a film through the port window and hearing the intermittent whirring that watching a movie in an auditorium was strange to me.

In 1978 our house was set on fire by the KKK, since my parents adopted many Korean children, so that’s how I ended up living in the projection booth at the Sher-Den Twin. I spent my summer mornings picking up trash from the parking lot, repairing the speakers after running from the yellow jackets who would build nests in the terminal strip boxes, to making up and tearing down prints. We even had to make a regular Wednesday trip to Dallas to Central Film Shipping to pick up our prints straight from the raw spools.

Well I could write for hours about my life at the Sher-Den Twin. It was my favorite place and favorite home. After the concession stand was leveled I walked the site and found my Green Eggs and Ham book, had a long cry and never went back. I like to remember the drive-in the way I grew up with it.

Walking next to the concession stand as the sun was setting and the sky was dusky yellow. It was hot outside and I would make my way up stairs to get ready to start the nightly double feature with my Dr. Pepper and pickle juice.

Thanks Matt. One old theatre dawg to another,I knew you had a story in you.Hated the KKK part,but your mom and dad were very special people to take care of children,I am a father of four and appreciate their efforts.

Went by this area on 11-22-10 and nothing remains from what I can tell except the blacktop (DriveWay) that led up to the ticket booths. Some of it is still there.. There is a school now built on the edge of the property where the Drive In used to sit.
Just to mention.. The Marque for the TWIN CITY Drive In is still standing! Now being used for a Landscaping Company. Nothing else of the Twin City remains from what I can tell..
Randy A Carlisle
Historical Photographer
For Drive In Theatre Photos, go here:..
View link
For Walk In Photos, go here:.. View link

The above address maps to near the entrance of the drive-in, which is visible on Google Earth using 2008 or earlier imagery.

Here is a 1974 aerial photo of the drive-in, courtesy of Earth Explorer and USGS:

The Sher-Den Twin Drive-In opened its gates in December 1969 and closed in 1985. Despite the two screens being removed in 1987 and both the marquee and concession stand being torn down in 1997, the parking traces of the theater remain until 2005.

Today, the property is still empty. You can still see the traces of the ramps and entrance/exit road.