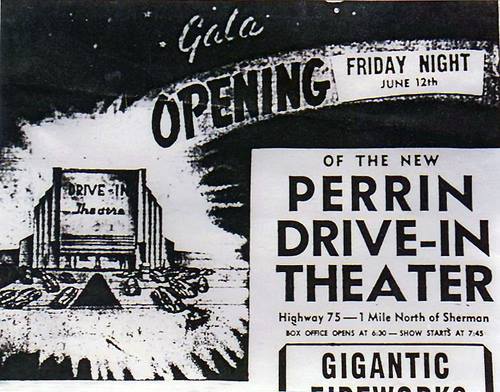 The popular drive in had a successful sixteen year run before being closed and demolished in 1969 to make way for the Sher-Den Mall.

The drive-in maps perfectly to the above address.

Here is a 1955 aerial photo of the drive-in, courtesy of Earth Explorer and USGS:

@Chuck: I am in New York, so I can see are the current and historical aerial imagery, and then match up the surrounding features such as roads, buildings, rivers, and lakes.

Historic aerial photos are a great way to document the precise location of any drive-in, along with topo maps. Especially for those drive-ins which were closed early in the 1950s or 1960s, that not many people even remember existed. It also does away with a lot of debate over exactly where the drive-in actually stood, in cases where people disagree.

I am working on a project to placemark and document every known drive-in location in the United States, using Google Earth. Open drive-ins are represented by green placemarrks, red for closed, cyan for drive-ins which were known to exist, but their location is undocumented, and yellow for documented locations which are unnamed.

I have some people helping me out by doing placemarking for states in the midwest and northwest. I have already completed New York, New Jersey, Minnesota, Nebraska, Alaska, Arkansas, Kansas, Colorado, California, Nevada, New Mexico, Arizona, Montana, Utah, New Mexico, North Dakota, South Dakota, and am about 60% of the way through Texas.

Geez, there are a lot of drive-ins in Texas, didn’t those people have anything better to do than go to the drive-ins?

When the project is completed, you will be able to use Google Earth to see the precise location of every known drive-in in the country, along with supporting documentation which is embedded in each individual placemark.

Anyone who would like to volunteer to placemark a state or two may contact me at The regions that have not been placemarked yet are New England, Mid-Atlantic, and Southeast. I hope to have all 50 states completed by the end of March, just in time for drive-in season!

I left out Pennsylvania, which is also completely placemarked with 209 documented drive-in locations.

Texas had lots of drive ins because the weather permitted year round openings, and the towns are so far apart. In PA for example, one drive in could service 4-5 towns since they are so packed together. Seems like every little town in Texas had to have it own, and their was plenty of customers to go around at one time.

I love the old time 50’s-70’s aerial views, wished Google Earth would adopt them into their site. Not everyone likes them, and think they are a waste of time.

I have it being owned by Bob Davis in 1956.Sherman ,Texas also had a Campus Drive-in and Twin City drive-in in 1956.

How many car-slots did the Perrin Drive-In have? Also, who was the architect?