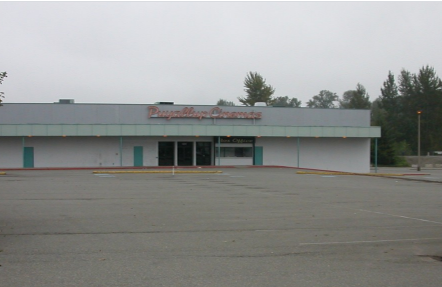 Opened on August 12, 1983. Closed in 2004. It was one of those quickly erected theatres of the 1980s. It became a second-run theatre in its later days. Building was just sitting there empty for ages, now converted into a bar and retail use.

I actually managed this theater from 1984 until 1988. Kate is right in her initial post – it was one of those quickly built theaters built mainly to keep the competition out. The population center of Puyallup moved from the downtown area to the South Hill area – a few miles away.

It is built with a car dealership directly in front of it and the Puyallup River directly behind it (it had flooded the parking lot while I was there). To one side is K-Mart and the other side are facility buildings for the city and a skate park. There isn’t enough room for a Wal-Mart (there are two Super Wal-Marts already in town anyway).

Dan, no disrespect, but wow this was a bad theatre from the day it opened. A true showplace for Tom Moyer’s “Luxury Theatres” chain. My parents took us kids to opening weekend in 1983 to see Mr. Mom and vowed never to return (we did, but they usually defaulted to the Tacoma South or Tacoma Mall Twin if they could). All auditoriums had seperate doors with no light trap leading to the hallway, letting light spill in. The heavy doors also had latches (why?) that clanked when opening or closing. Screen masking seemed to be common size so no matter of you were watching a scope picture or a 1.85 the image would be cropped. Mono sound. Luxury Theatres lovely brown-orange-yellow motif. At least the seats were confy if you sat in the back half of the auditorium. The front half were cheap thin seats. We went to see an odd documentary called “Trek” in 1985 that Luxury Theatres had booked into all their theatres. 1 hour in when the changeover was meant to happen the screen went white and the other projector did not fire up. The projectionist opened up the window and yelled down to the audience that there would be a short intermission, as if it were normal. Something tells me it might have been a regular occurance. At least Act III spiffed the place up when they took over, adding digital sound, replacing the ugly curtains with nice dark green ones, replacing the seats and possibly even putting in proper masking. I saw “The Birdcage” there in the big auditorium and was surprised by the impovement. I am surprised they could not keep it open as a discount house.

At the time of closing, Regal Cinemas was operating it. It made money, but they did not want to operate any discount theaters.

Mark, no offense taken. Luxury Theatres were the worse thing to happen to motion pictures in the Pacific Northwest. The owner (Tom Moyer of Portland) was very cheap and had no love for the cinema. He was in the business for one reason only – to make money.

To illustrate how cheap he was, we were required to return burned out light bulbs (yes, even cheap 100 watt bulbs) to Portland BEFORE they would send a replacement to us. Managers ended up buying their own bulbs just to avoid this stupidity.

In the early 1980’s there was only one mentality coming from Luxury’s Portland offices – build and operate a theater as cheaply as possible. They were designed to get people (and their money) in and out as quickly as possible while spending as little of the company’s money as possible. True, this is how businesses operate – but Luxury took it to extremes.

Outside of the managers (who were usually quite young), we hired almost only high school kids at minimum wage and worked them as long as we could before they wised up and moved on to something better.

My worst job ever.

And today Tom Moyer has a net worth of 625 million dollars. He made his in the theater industry.

The stories I could tell about his frugality. But, I guess that’s why he has the money now. :)

Tom Moyer wanted to sell his chain to United Artists in 1988. View link

Quick update. The building (most of it, at least) is now a Goodwill store. Seems kind of fitting.

Uploaded a photo of the abandoned building. Per danibuckley, most of the building, the end where the original entrance was, is a Goodwill Store. The Big Whiskey Saloon occupies the rest.