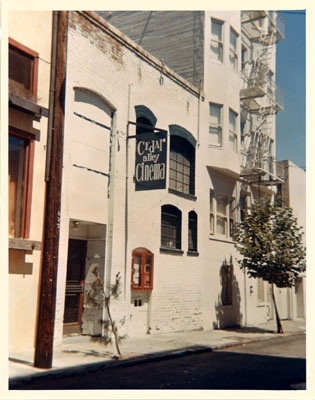 The building was originally built in 1919 as a grocery store. In 1938, it was still a Safeway store. A Chinese family operated a family grocery store in the building until January 1955 when it was taken over by Hans H. Hammann & his brother Detlef K. Hammann. It was gutted and converted into a movie theatre.

The entrance was switched from 1031 Post Street to a new entrance on 38 Cedar Alley. On August 20, 1965, the Cedar Alley Cinema was opened with Marcello Mastroianni in “8 ½”. Later, for legal reasons, the name was changed to Cento Cedar Cinema. Mr Hammann states that the cinema had normal projection, and not a rear projection system, as had been thought.

Until 1972 my wife and I managed the theatre alone. At that time we sold the business and leased the building to the Buckleys.
Hans H. Hammann

Cedar alley had been a grocery store. I personally removed all of the fixtures from the interior as I worked with Paul Kenney, the designer and first owner of this movie house. I still have the original plans of the building as laid out by Paul. Rear projection and single aisle. I live in Montana now and can be reached at 406 207 4958 Thank You, Nathan Terre'

Paul Kenney was an artist, sculptor and on maker living on Beulah street in the Haight, Ashbury district when I first met him in 1964. Richard Hongisto was a visitor, when Richard had just joined the S.F. police force. The love film and literature was our common bond. If any one film could most illustrate Paul’s love of cinema, “ The Saragossa manuscript ” would be the one. Any one who knew Paul, who might wish to converse, please call me in Montana at 406 207 4958. Always ready to nostagicate about the 60s. Nathan

I frequented this movie house quite a few times in the mid-1970s. Saw many wonderful old movies, my favorite being “The Ghost and Mrs. Muir.” So much fun – and the site of a few great dates. I seem to remember at least one cat that roamed the theater and would jump into laps. The first time it happened to me was a bit of a thrill. Or did I dream that part?

I was an habitue of the Orion a house away from the Cento Cedar. The theater was hand built by a German couple whose last name sounded like Deadlift. The husband operated the projector and the wife sold tickets from the candy counter. The theater was picketed by the union because the projectionist was not a dues paying member. When the couple would not knuckle under, goons from the union slashed seats and threw stink bombs at least once. All the man wanted to do is to show movies that were not 20th Century Fox or Warner Brothers. Really, the two of them put that theater together BY HAND! That was a time for foreign films. There were the Larkin and Music Hall. The former is now a porno house and the latter a church. Movie goers from those houses used to take their coffee drinks at the Orion before and after performances. Yes, and the fish and chips from Old Chelsea fried up by Kathy or Scotty. It was an interesting neighborhood with the Foreign Language Book Store right at the corner of Cedar Alley and Larkin.

Glad someone remembers this little theater. These were the movie houses where you got to see obscure films that barely made it to 4-5 markets in the US, and made San Francisco a “moviegoer’s” city.

I remember seeing MONTY PYTHON’S AND NOW FOR SOMETHING COMPLETELY DIFFERENT here with my mother and among a dozen or less patrons we were the only ones laughing. Monty Python was practically unknown in the US at the time. When they started airing on KQED, I was already primed to soak in every episode.

Hi—Researcher working on a book about the Beatles, and trying to confirm a small fact about the Cento Cedar Cinema: does anyone on this thread know whether the theater showed ‘Let It Be’ in early June 1970? I realize this is a needle in the haystack request, but it is a crucial detail for this book I am helping to research. Many thanks.

I turned 72 in August. I am afraid that many who had spent some part of their lives on Cedar Alley may no longer be with us. Considering especially that the war in Vietnam was raging and many were tossed into the fire. Does anyone remember Fred, the Japanese speaking man who made the coffee drinks at the Orion? How about Iris and Clarilee, who brought your order to your table? How about the jukebox that included Sergovia in its selections? Oh yeah, not to forget the coterie of chess players who’d play until closing. Those were carefree times…, memories of yesteryear. Does anyone have any fond remembrance of the Cedar Alley enclave to share?

Grand opening ad from August 20th, 1965 can be found in the photo section.

Hans and Lila stumbled on a successful double feature of “Shadows of Forgotten Ancestors” and “War of the Buttons," an unlikely pairing. But they drew two different audiences and were turning people away from many shows. They realized if they dropped reels from "Shadows” they could get an extra show a day. Since the film has a little narrative logic they got away with it as few people noticed. Another thing I remember about the theater is that they served soda in bottles and when people accidently kicked over their drink (no cup holders then) it rolled down, making a loud sound on the wooden floor, spewing sticky soda in its path. Regulars would try to guess when it would make its loud bang into the stage at the bottom so they could yell out “bang!”