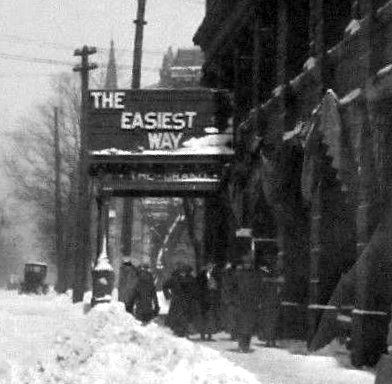 Opened in November 1897, the Grand Opera House was located on N. 7th Street at Cherry Street. It was meant to replace the earlier Naylor Opera House, which was destroyed in a fire in 1896. The Grand Opera House originally seated over 1,300, and besides opera, hosted plays, minstrel shows, and local religious and political gatherings.

By the early-1930’s, when movies replaced live entertainment there, the Grand Opera House became known as the Grand Theatre. By 1941 it was operated by Alliance Theater Corp. In 1959 the Grand Theatre closed, and after a farewell banquet was held in the Grand Theatre, the building was torn down in August, 1960.

The Liberty Theatre was then renamed Grand Theatre.

unless there was two Grand Theatres in Terre Haute, the address shown for this Grand Theare is incorrect. I grew up watching movies at the Grand Theatre on Wabash Avenue. I was born the last part of 1950.

The theater on Wabash Ave. was renamed the Grand after the Opera House was torn down. I was in the Wabash Ave. Grand in the 70’s when I was at ISU. The manager told me that there was a tunnel from the front basement across Wabash to the theater building on the north side of the street. He said that actors would appear on multiple stages using different names at the same time to increase income. According to him many of the theaters around 7th and Wabash were connected underground.

Gone With the Wind @ the Grand on 7th street http://images.indianahistory.org/cdm4/item_viewer.php?CISOROOT=/P0129&CISOPTR=107&CISOBOX=1&REC=15

A photo of the lobby of the Grand Theatre in Terre Haute appears on this page of the May 4, 1935, issue of Motion Picture Herald. The lobby had recently been redesigned in a modern style featuring Carrera Glass, Pittsburgh Glass Company’s competitor to the better-known Vitrolite brand of glass tiles.