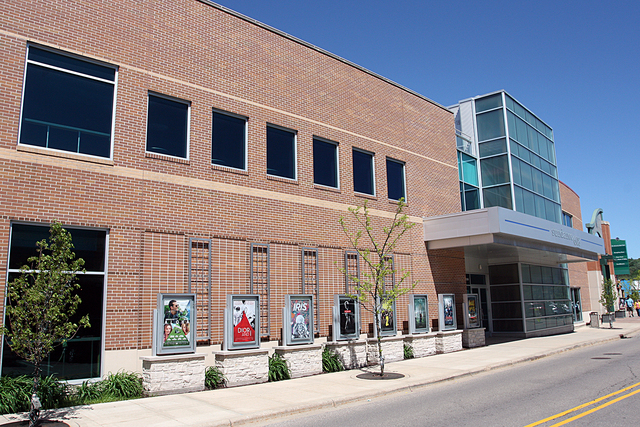 It specializes in art films and independent productions in six all-stadium seated auditoriums with plush seats, digital stereo surround sound and outstanding presentation. There are no advertisements presented in the theaters.

Other touches are the art gallery, bistro, bar, and coffee shop for refreshments and enlightenment.

This new theater complex replaces the Hilldale, an older art house at the back the same mall.

Great news for movie fans in Madison. But a theater apparently named for its telephone area code? Somehow, “Let’s go to the 608” lacks the charm of “Let’s go to the Rialto or the Bijou or the Strand.”

Unfortunately Sundance 608 (now simply Sundance Cinemas: Madison) has drifted far from its original mission of serving Madison as an “arthouse” cinema. After effectively putting another arthouse out of business (Westgate), and driving business from the Orpheum downtown, Sundance began to use more and more screens for blockbusters and other major studio films. They have relegated nearly all foreign films to a single screen, unimaginatively titled the “Screening Room.” Many weeks, only two of their six screens will be showing anything exclusive, that is, not playing in every other multiplex in the Madison area. And even their exclusives rarely venture beyond the obvious boutique fare (pseudo-indies like “The Kids Are All Right” or the latest starring Audrey Tautou). Rather than going a hip route like Alamo Drafthouse or the newly-refurbished Logan in Chicago—by programming cult films and festival favorites, hosting mini-retrospectives, inviting filmmakers, cultivating an enthusiastic and loyal customer base via imaginative use of social media—Sundance’s approach (seemingly dictated by corporate HQ in San Francisco) has been resolutely lazy. The one great thing they have done for the community is serve as a venue for our fantastic Wisconsin Film Festival in the spring.

Effectively, from having 2.5 art houses (Westgate, Hilldale, and the Orpheum) in the early-mid 2000s, Madison has gone to having a two- or three-screen Landmark-style cinema coupled with a few more screens showing “The Avengers,” etc. The Sundance “brand,” rather than associating itself with adventurous film programming, has been reduced to amenities like mixed drinks, scones, “reserved” seating (seldom of any use), and posh interior design.

It’s hard to entirely blame Sundance for their shift toward a mainstream multiplex, since I’m sure they felt great economic pressure to show films that would draw bigger crowds. But they seem not to have tried very hard to do anything else. Whatever the reasons, this theater has not fulfilled its initial promise. Various nonprofit venues, like the UW Cinematheque and the Madison Museum of Contemporary Art, do their best to bring more adventurous new films to the city.

It has been announced that this theatre and the others in the Sundance chain will be sold to Carmike for $36M. Carmike will be allowed to maintain the Sundance name, but will not be able to expand the name to its other theaters.