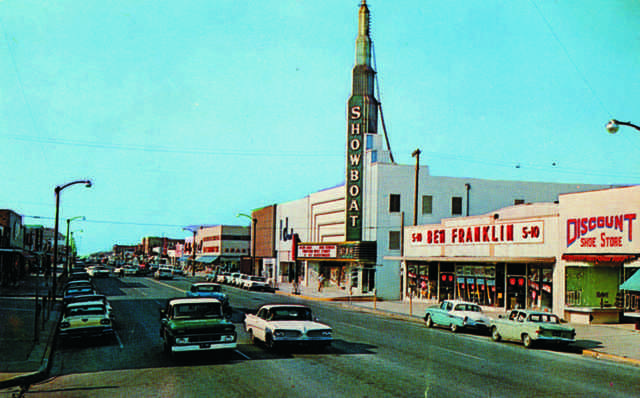 A 2003 photo of the “new” Showboat and a photo of original Showboat in Texas City. The original has been demolished.

The theater was in need of rehab in 1990:
http://tinyurl.com/dxe8fh

I saw the first Batman movie (1966 with Adam West) at the Texas City Showboat for my 8 year old birthday party with some other Texas City boys. It is one of my fondest childhood memories. – tom morgan

My father, George Jolley, managed the theatre in the 60’s. I grew up there. Saw many great films. Johnny Long of LCL theatres owned it. Great theatre. Seated 1700 ppl. Lots of memories of the showboat.

I might have the seating capacity wrong but I know it had a large lower level of four sections. Two large sections in the middle seperated by a center isle and an two outside rows. It also had a very large balcony. Or at least it seemed large to me at the time.

The original Showboat Theatre was designed in 1941 by architect Ernest L. Shult, but might have opened in 1942. The house was on a list of theaters designed by Shult that was published in the 1950 Theatre Catalog.

my sister and I went without permission to watch “Grizzly” at the Showboat while my mom was at work and my father was deployed. I was 8 and she was 10. We had to walk back home in the dark afterwards. We lived behind the Lucky 7 convenience store. We were scared sh**less!

David Zornig, I’m not sure but it seems the pictures you linked may have been taken at a re-opening. Included in the text below the pictures, “The Showboat Theater, a Texas City landmark that was damaged and rebuilt several times during the period of 1942 to 1949, was known for its neon tower, which lit up what was then the downtown district of Texas City.” That was before my time but I know there was a lot of damage from a hurricane in 1943, and there was damage in that area from the explosions in ‘47.

I was a kid in the 1950s & I vividly remember the Showboat Theatre.