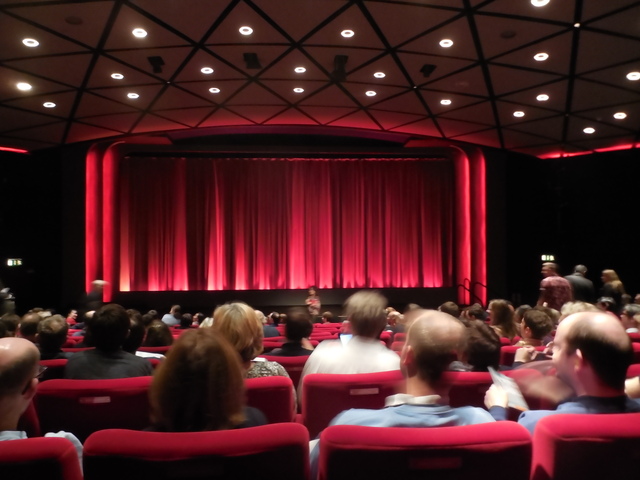 Located on the Southbank of the River Thames at Waterloo, the building first opened in 1951 as the Telekinema, an attraction which formed part of the ‘Festival Of Britain’ exhibition. It was a temporary structure designed by Wells Coates and had a seating capacity of 410. There were 252 seats the stalls which had an unusal reverse rake, 146 seats in the balcony and 12 seats in loges which adjoined the projection box. Initially there was a one hour presentation which mixed 35mm film, 3D film and ‘live’ television where visitors could see themselves on the screen! After the ‘Festival Of Britain’ closed the building was re-modeled and became the first exhibition home of the British Film Institute(BFI) and was re-named National Film Theatre(NFT).

In 1957 the ‘temporary’ structure was demolished and a new National Film Theatre constructed with the main entrance facing the river under Waterloo Bridge. It was designed by N. Engleback of the London County Council(LCC) Architect’s Department. When it opened on 14th October 1957 there was a main screen and a small conference room upstairs. Later a 2nd screen was added and then the building was expanded to accomodate the Museum of the Moving Image(MOMI), which had its own 135 seat theatre. MOMI was closed on 31st August 1999 due to financial restrictions.

The main screen (NFT1) seats 450 on one level and the second screen (NFT2) seats 160. The programming is repertory and covers the entire aspect of film though the years from all continents and countries. A third screen was added in March 2007 and the complex was re-named BFI Southbank Cinema.

Photo of the auditorium of the NFT1 here:–

September 2008 photo of the Riverside entrance to the NFT here:–

The main auditorium, Screen 1, is absolutely wonderful. It is just as you would imagine a perfect cinema should be. It caters for all formats (16mm, 35mm, 80mm and digital) and all screen ratios and, to me, is the perfect environment to watch movies in.

Screen 2 I am not so keen on. One senses that you are looking up to the screen, designed that way probably in part to give good sight lines because the floor only gently slopes down.

Screen 3 I like very much. Stadium seating, good sight lines and an impressively large screen for the size of the auditorium. A bit cramped though on the legroom compared to modern cinema standards.

There is now a fourth screen, not detailed in the cinema details above. Named the Studio it has just 36 seats and is equipped for digital projection only. Sadly the screen is only 1.85 ratio necessitating Scope films being shown “letterboxed” with no masking. This is presumably due to architectural considerations when trying to squeeze an extra auditorium in. It may be a pleasant environment with comfortable seats but, in effect, it becomes just like a large TV. I avoid watching Scope films there; this is not how they are meant to be shown.