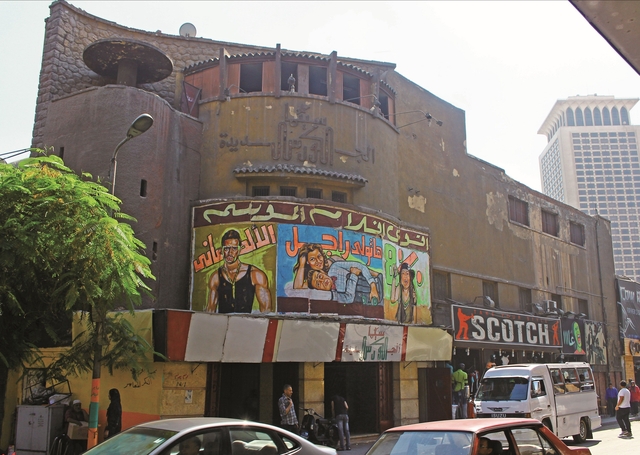 Originally opened in 1946, it was later described as a run-down place. One of the rules of entry was ‘men cannot be admitted wearing short trousers’(shorts). It was demolished around 2017.

They must have an amazing air conditiner in there….Egypt is hot!
Do they have a rule agaianst fellows wearing Kilts!
Kilts are cool…its like a wearing a man dress- good airflow!

According to this website, the Ali Baba was built in 1946. Architect was Naoum Chebib. Scroll down to his section for a discussion of the Ali Baba:
http://tinyurl.com/399k4s

The cinema Ali Baba (sometimes called The Kursar) is located near the Italian consulate in Cairo. The metro station is called Nasser. The ticket costs 7 Egyptian Pounds (1 euro at the rate of 15/11/2008)
This is NOT an officially gay cinema. There are two floors in this cinema. The ground floor is for those people who do not wish to have sex, but are only willing to either watch the film or meet other men and go somewhere else. The toilet is on this floor on the right side of the screen. The toilet is run down and dirty like most things in this cinema and like ALL public toilets in Cairo.
The top floor is extremely run down, but it is where action takes place. No woman will go there. Not even a prostitute. Only men (some will ask for money, but there are so many people looking for sex that there is no need to pay AT ALL). If someone asks for money just walk away. Be very careful especially if you are a foreigner because they think that foreigners are ALWAYS rich. This compared to them may be true. So take ONLY the money that you will need. I myself NEVER had problems with thieves in Cairo. DONT take anyone to your hotel or home. It is EXTREMELY dangerous. The administration knows that sex takes place on the top floor, but as everything in this country (Egypt), you must make believe that all is under control, though people know that it is not. The man that takes you to your seat will expect at least 3 Egyptian pounds from you (especially if you are a foreigner). So, the cost will actually be 10 EGP. Egyptians give one Pound. He is NOT nice AT ALL. Actually, he is EXTREMELLY rude. I have seen him hit one Egyptian (though not very hard) because he caught him doing oral sex. If you are a foreigner, most probably you will not get hit, but he will put you out with no manners at all. Not only oral sex goes on, but also anal sex. Sometimes the administrator will come to the ground and top floor tocheckif someone is doingit. And sometimes from the ground floor he will flash his light towards the top floor to see if all is ok. So, keep an eye at the entrance and if you see the beam of his flash light, just STOP IMMEDIATELY what you are doing and make believe that you are watching the film. Also make sure that both hands are visible so the administrator will see them. In case you are too involved in what you are doing, people will warn you. In a certain way they help each other! The chairs are broken and you can see tissue everywhere. Sometimes people are too lazy to go down to the toilet, so they may urinate in an angle. The cinema is open from 13:00 (if I dont mistake) up to 23:00 (if I dont mistake). Open everyday even Fridays. Most people in this cinema are tops and low class. The ones that are walking around are usually bottoms. The tops sit and wait for you toservehim. Usually the bottoms are from the upper class and the tops from the lower class or from the VERY low class. Some Egyptians will sit still even if they want you tohelphim. Dont be afraid. Sit next to him and slowly rub your leg on his. If he does not take away his leg, then it means he wants. Some dont even open their zippers. You have to do it. Take your own condoms (Egyptians HATE condoms), though they will decline to use it. It is up to you to risk or not. Being circumcised, you will notice that most people are clean. They even wash their penises after they urinate. Before coming to Egypt make sure you are vaccinated against hepatitis A and B. These diseases are very common here and in a cinema like Ali Baba, you are most probably to get it if you are not vaccinated. Talk to your doctor and ask to be vaccinated for all possible diseases. I did it. Some foreigners have been excluded from entering this cinema because the administration is afraid that you will have a problem and then go to the police, but I am a foreigner and I ALWAYS go there. DONT expect people to speak Arabic, especially the tops that go to this cinema because they are, as I said before, from the lower class. The upper class may speak English. Many people will ask for you phone number. Egyptians are very nice to foreigners and always want to become your friend with you.
During the Summer this cinema is an oven. It is extremely hot. No air conditioner at all. From middle November to middle April it is ok.
Have fun!

I noticed that MANY times the police goes to this cinema. The fat old man at the entrance sells drugs!!!! DON`T buy fromhim!!!! He saw me having sex with a guy there and he asked me 200 Egyptian Pounds. Then he told the guy to leave and told me to go to the toillet. There he wanted me to suck his dick. I said no and he touched me and he got down on his knees. He sucked me and wanted me to fuck him but I left because I was disgusted. He told me that he can give me (and he sowed to me) hashish and some other pills that I do not know what they were. He also said that he knows some male and female prostitutes. he is the worst kind of person I met in Cairo. He does ALL things that are wrong, he is gay and he hates gays. He is very brutal and hungry for money.

By the way, what FOREIGNER4ARABS said IS true!!!!

what is the best times to go there? how to get in to this cinema. it looks like they dont want me to go in. but i am speaking a little arabic – so i dont know why they not letting me in :–(