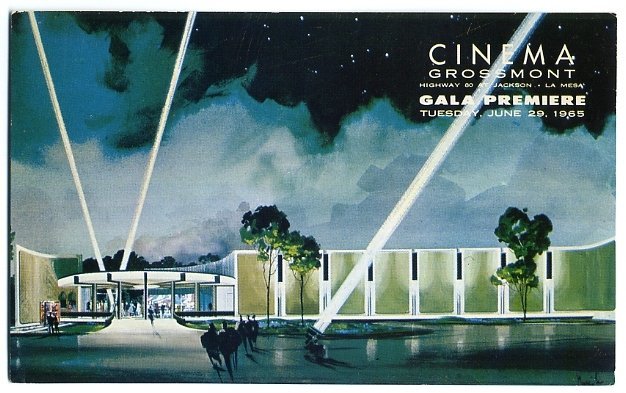 Opened in July 1965 with “In Harm’s Way”, the Cinema Grossmont was a single screen theater owned by Statewide. Originally located at Highway 80 and Jackson, it would soon serve to anchor the Grossmont Mall.

Equipped for 70mm exhibitions, the first 70mm engagement to play there was “Those Magnificent Men in Their Flying Machines” on August 4, 1965.

This theater was also the only place in the area to see “Raiders of the Lost Ark” in 70mm when it opened in 1981.

The Grossmont Theater was joined by a small three-screen multiplex in the mall in the early-1980’s before it closed in January 1992 with the film “JFK”.

After its closure, it served as a Good Guys electronics store. Currently, it sits empty.

The building is about to open as a branch of Chuze Fitness.

Tinseltoes linked to the wrong page in an earlier comment. Here is the article about the Cinema Grossmont.

The Boxoffice article fails to mention the architect of this theater. Fred Stein’s Statewide Theatres was usually fairly adventurous in its choice of architects, and between 1963 and 1967, during which period the Cinema Grossmont was also built, the chain hired the San Diego modernists Tucker, Sadler, & Bennett to design four large 70mm theaters for them, including the Cinema 21 in San Diego (the other three were in Anaheim, Bakersfield, and San Bernardino). It is possible that the same firm designed the Cinema Grossmont as well, but I’ve been unable to find any confirmation of this.

MGM held a sneak preview of “Logan’s Run” somewhere in San Diego on Friday, May 7, 1976. Since it began a regular run at the Cinema Grossmont, I wonder if the sneak preview was there as well. Does anyone know?

I remember going to the Grossmont to see “A Boy Named Charlie Brown” in 1970, probably for my birthday since it ran in March, and my birthday is on the 10th! But more memorably, in 1981 I went to a late night showing with my dad of a film I had heard was a lot of fun, but which hadn’t quite caught on yet. We were two of about a dozen people in the thousand-seat theater. But from the moment the film started we knew we were in for something memorable and special. When I had first heard the name of the film I thought it was an archeological documentary. It wasn’t. It was “Raiders of the Lost Ark”! I’ll never forget seeing that with my dad! Thanks, Cinema Grossmont!

Logan5… The May 7th, 1976 sneak preview screening of “Logan’s Run” was held at the Valley Circle.

I’d like to pass along the link to a reference list of the 70mm engagements of “Logan’s Run” (1976). The article includes mention of the run here at the Cinema Grossmont and as well mentions the San Diego sneak preview screening asked about a few comments ago.

“The Graduate” opened here fifty years ago today. The film went on to play 30 weeks, the third-longest run In the venue’s history. And to commemorate the classic film’s golden anniversary, here’s a new retrospective article which includes some exhibition history (and other) details.

Passing along the link to a 12-page 40th anniversary RAIDERS OF THE LOST ARK retrospective featuring a historian Q&A and 70mm playdate chronology. Cinema Grossmont is mentioned several times.