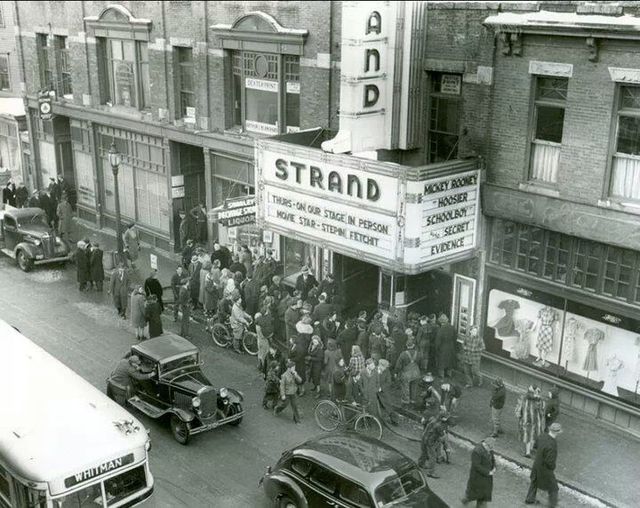 The Strand Theater opened in 1911. On March 10, 1941, Brockton firemen were battling a fierce blaze at the theater when the Strand’s snow-laden roof collapsed. Thirteen firemen were killed and sixteen were injured. Hundreds of Sunday night moviegoers had left the theater a few hours before the fire started. The building was completely destroyed.

In the early 1940s, the Strand in Brockton was part of the Fred E. Leiberman theatre circuit of Boston, also known as Proven Pictures. A few years ago, I saw a photo from the files of the Brockton Enterprise made the day after the fire and taken from across the street and 2 or 3 stories up. There was a fire truck in the street but there was no evidence at all of any fire damage to the lobby entrance and front of the building. The fire apparently did not spread back from the auditorium. On the marquee was posted a movie title, plus on stage the noted character actor of the 1930s, Stepin Fetchit.

You have to consider the perspective of the reporter that is at the scene. He sees the roof cave in and assumes the building is a goner. I usually don’t see follow up stories, at least without combing through the archives. Is the building demolished as of today?

If I remember the old photo correctly, the theatre marquee and entrance were in a commercial building. The auditorium and stage were undoubtedly in a seperate adjoining structure in back. I don’t know if the commercial building which housed the entrance is still standing. The photo was part of a calender issued by a bank or credit union in Brockton in 2004 or 2005. All the photos came from the Brockton Enterprise. I clipped the photo out and sent it to the archives of the Theatre Historical Soc. I have heard 2 versions of what happend during the fire: 1) the firefighters went up into the balcony with their hose lines and the balcony collapsed. 2) the firemen went up into the balcony, and the roof collapsed. I suspect that the roof and the balcony both collapsed. There is an effort underway, after all these years, to put up a memorial plaque on or near the site in downtown Brockton.

On Monday, March 10 there was a memorial ceremony at Brockton City Hall in remembrance of the firefighters who were killed at the Strand Theatre in 1941. It was announced that a granite and bronze memorial marker will be unveiled on May 10th but I don’t know where in Brockton it will be sited.

The memorial to the Strand Theatre firefighters who were killed on March 10, 1941 was dedicated on Saturday morning, May 10, 2008. The rather imposing sculpture is located on City Hall Plaza in Brockton, which is said to be just one block from the Strand’s location.

One of the recent articles (May 8, ‘08) in the Quincy Patriot Ledger concerning the new memorial sculpture has a file photo taken after the worst of the fire was over. It shows firefighters standing at the right front of the auditorium in front of the first row of seats, aiming a hose at the balcony. There does not appear to be a shred of damage to the wall, seats, proscenium or curtains. There does not seem to be any debris around them. All the damage was apparently confined to the upper rear of the auditorium. The article states that the first fire alarm was called in after midnight for a fire in the basement. Unbeknownst to the firefighters was the fact that a fire had been burning undetected in the space between the rear ceiling and the roof. When they went up into the balcony, the roof suddenly collapsed on them. There is today only one person still alive from among those who fought the fire, Edward Burrell, age 93.

The address was 15 School Street in Brockton, at the corner of Main Street downtown. It had 1,685 seats. These two facts are in an article in the Quincy Patriot Ledger of Feb. 5, 2009 by Maria Papadopoulos titled “City to honor last living survivor of Strand blaze.” These facts are also in an earlier article by the same writer posted above by Lost Memory on Feb. 3, 2009. That article states that the Strand opened in March 1916 and was renovated in August 1937. The writer states in both articles that the Strand was the largest theater in Brockton.

The Strand in Brockton is listed in the 1927 Film Daily Yearbook as having 800 seats and open 6 days per week. As is so often the case with the FDY, the seat count seems wrong.