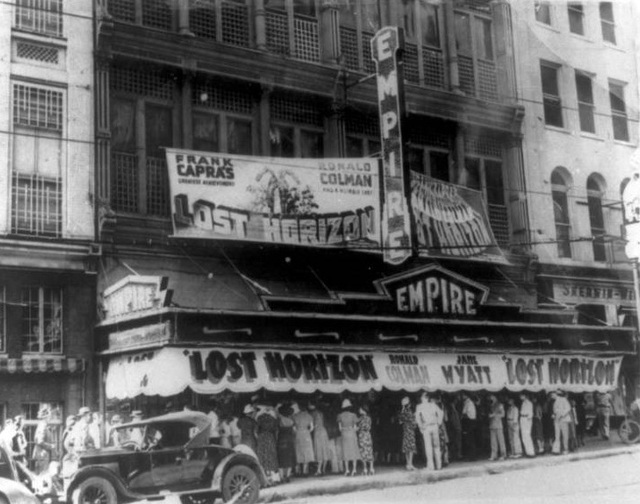 The Empire Theater opened on January 21, 1927 with Laura La Plante in “Her Big Night” & Mabel Normand in “Raggedy Rose” plus vaudeville on the stage. In the 1955 & 1957 editions of Film Daily Yearbook the Acme Theater is listed as operating at this address. The Empire Theater closed in 1984.

For anyone interested in Birmingham history in general, there is an outstanding website named Birmingham Rewound and it is mentioned in several of the postings of Birmingham theatres on this site. This link:

will take you to the downtown theatre page. About half way down the page are several paragraphs on the Empire including several pictures.

I remember attending this theatre many times while growing up in Birmingham. Among the pictures I recall seeing there are: Nicky: Wild Dog Of The North, 633 Squadron, Is Paris Burning?, and Goldfinger, which is the subject of one of the pictures on the website.

Here is a photo of the Empire Theatre dated 1937. The triangular marquee and fake stone front in the 1980 photo Chuck linked to were installed in 1949, according to the page Stan Malone linked to earlier. The slicker ground floor features (looks like faux marble to me) and the dark coverings of the second floor windows dated from another remodeling in 1964. The Empire Theatre was demolished in 1984.

According to this article about an artist named Robert Cottingham, who is having an exhibition of nine large paintings of this theater’s marquee done in different media on display in a New York gallery, the paintings are based on photos he took of the theater twelve years before 2008 – which would mean that theater was in existence in 1996: View link.

Oops – sorry, wrong Empire in Alabama. The paintings of the marquee of the Empire in Montgomery.

This photo of Third Avenue with the Empire Theatre at center is dated 1929.

Hank Williams WON a talent contest back in the thirties at the Empire Theatre in BIRMINGHAM!!!