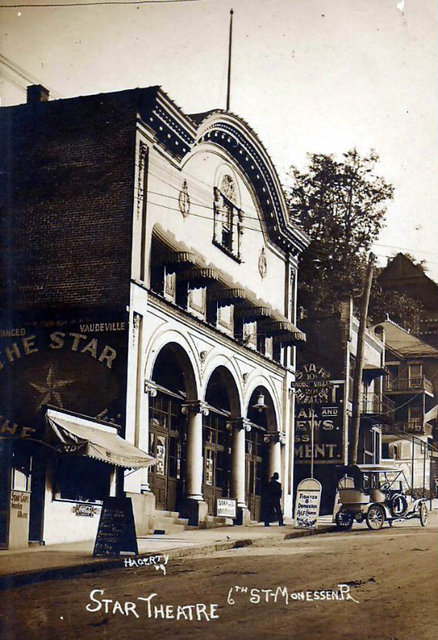 This is from the Monessen Valley Independent in 2002:

The Valley had plenty of active movie theaters, but it was still a sad day Sept. 17, 1964, when the Star Theater was torn down to make room for a parking lot. Famous headliners such as Bob Hope. Buster Keaton and Bert Lahr were among the many stars who had played at the Star.

This is from Boxoffice in February 1952;

MONESSEN, PA.-Sixth street merchants extended best wishes in cooperative advertisements when the Star was reopened recently. The Star had been dark for most of last year.

The Monessen Amusement Company operates the Star, the Grand and the new A-house, the Manos. Tony Askouras, who had managed the Grand, is now manager of the Star. The Grand closed on January 23.

There are pixes of Jack Kennedy campaigning. The STAR building is visible in the background. I believe that the GRAND was the original MANOS renamed when the new MANOS was built. I have searched for info on the STAR in Charleroi, not much luck. I believe it was on Washington Avenue. There was a notorious (prostitution) STAR in Washington, that seems to get confused with Monessen and Charleroi.

I have an error above. The notorious theater in Washington.PA, confused with Monessen and Charleroi was the Lyric, not the Star. Area papers covered a story in February, 1907.

Keystone Players To Use ‘Old’ Star

The Keystone Players are no longer stageless.
The Valley theatre group last night approved an agreement which will make the Star Theatre in Monessen their headquarters.
The long vacant theatre was offered to the Players by Ted Manos of the Manos Theatre chain at “a minimum cost.” The Players voted unanimously to accept the “generous” offer.
Previously the theatre group made its headquarters in a storeroom along Belle Vernon’s Main St. Plays were staged in the Bellmar High School auditorium.
A spokesman for the Players pointed out there is a nationwide
trend to make more use of vacant movie houses by community theatre groups.
Two plays are planned before summer. There are still openings
in the theatre group for interested persons.
The next meeting will be held Wednesday at Studio Arts in
Monessen. Members and interested persons are invited to attend.

Looking through old issues of the Monessen Valley Independent, I am finding advertisements for attractions showing at the Star Theater in Monongahela all the way through the week of April 4-10,1973. The film advertisedis “The Cross and the Switchblade”. If the Star was razed in 1964, was the name transferred to one of the other theaters in town, perhaps the Anton?

The Star was a very early theater, having been mentioned in the September 5, 1908, issue of The Billboard. According to Monessen: A Typical Steel Country Town, by Cassandra Vivian, William McShaffrey opened the Star some time after he had built the Monessen Opera House, which had opened on December 4, 1904. He also operated theaters in Monongahela, Charleroi, and Donora.