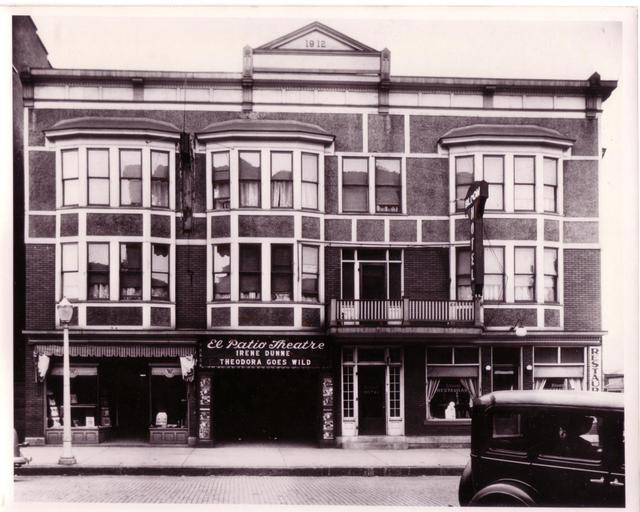 The building dates from 1912. The El Patio Theatre was opened June 28, 1927. By 1941 it was owned by Rivoli Theaters through their subsidiary Tyrone Theaters, and leased to Warner Bros. Circuit Management Corp. It was closed May 8, 1960. It became an appliance store, and was demolished in 1971.

This is from Boxoffice magazine, May 1960:

The Wilson circuit closed the El Patio Theater, Tyrone, on May 8. The city’s B-house had been operating only on weekends, with Tyrone’s Wilson Theater continuing on a full-time basis.

An item in the June 24, 1927, issue of the Altoona Tribune said that George Wilson’s new El Patio Theatre at Tyrone would open on Tuesday, June 28. A later article in the same paper described the El Patio’s auditorium as having a blue sky with twinkling stars, so, given the name, it must have been an atmospheric house with a Spanish theme.

The El Patio Theatre was damaged by a fire in 1942. The auditorium suffered mostly smoke and water damage, but the entrance was completely destroyed and had to be rebuilt. Warner Bros. gave up the theater in 1954, but the house continued in operation for a number of years under new management. The Wilson Family leased the property to an adjacent appliance store in late 1964, according to the February 4, 1965, issue of The Tyrone Daily Herald. The article did not say when the theater had closed permanently.

The El Patio Theatre was demolished in 1971 to make way for a highway construction project, according to the July 16 issue of the Daily Herald.