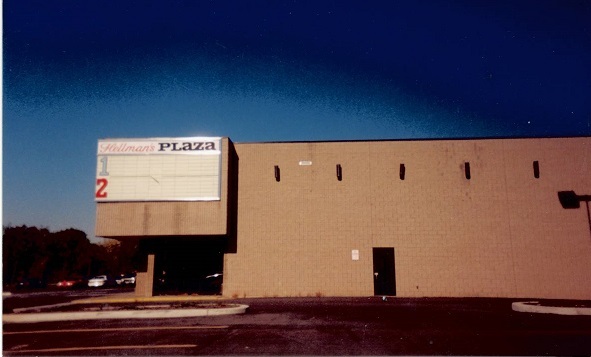 The Hellman chain of Albany, NY, opened the Plaza around 1970. It was a 750 seat house free standing as part of a shopping plaza. The chain was leased to UA by the mid 70’s and was twinned by the late 70’s. Each house held around 350 seats after the twinning.

UA alternately ran this theater as a first-run and second-run house, switching formats for years. It would be first-run during the summer and holidays, and a dollar house on the off-season.

The theater was closed around 1990 and sat vacant for a few years until it was demolished for parking after the shopping center was renovated.

I filled in as manager of this theater in the summer of 1988 — its last stint as a first-run house. In 1989-1990, UA sold the place to (if I remember correctly) Bob Shannon, who showed independent films. Shannon was likely the last operator before the place was demolished. While there, I met a wonderful man by the name of Fred Brush. Fred, who kept the projectors in running order, was over 80 and had worked as a projectionist since the time of hand-crank projectors (literally). One of the major industry magazines (can’t recall the name) did an article on Fred around this time.

I managed this for a short time around 84-88, shortly after United Artists decided to go manager / operator. While I was there we went from full price to $1.00 tickets showing older movies. We did okay selling tickets and quite well in the concessions. I remember Fred as great guy to work with, but hated changes. He was completely against the upgrade to the platters and didn’t believe it would work. After a few hundred miles of film on the floor we got the bugs worked out. It was a great place to work and if anyone remembers me, please contact me. Jim reed