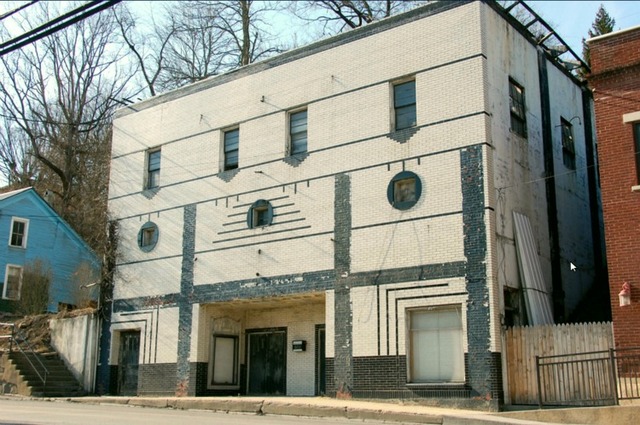 A really nice Art Deco Type of Theater that need to be renovated possibly as a live entertainment Venue especially for Artists unable to book into the prestigious Carnegie hall of Lewisburg or possibly a branson type of venue.Just a suggestion!

What Great one sheet case.I found one that could be set outside the Theatre it has beautiful wood trim work,Found it in the Knox Theatre back by an exit door,Hopefully,someone saved the one Chuck put on.

Here is an article about the Grand Theatre from the web site Main Street Ronceverte. The article says that the theater was built in 1937, and was designed by John Norman Sr., one of the state’s first African American architects.

The Grand has been placed on the 2011 Endangered Properties List of the Preservation Alliance of West Virginia. PAWV provides this gallery of photos depicting the Grand as it is today (I’ve been unable to track down any vintage photos.) A non-profit organization, the Ronceverte Development Corporation, intends to buy the Grand to preserve it from demolition. The plans are to eventually convert the theater into a community college facility for cinema arts, and convert the former radio studios upstairs into a recording studio.

PAWV calls the house Shanklin’s Grand Theatre. James C. Shanklin was apparently the original operator of the Grand. He died in 1958, and his obituary can be found on this page of Boxoffice for March 10 that year.

This website has not only a history of the theatre but some images (including from above) showing the horrific condition of the collapsed roof and highly deteriorated interior. https://abandonedonline.net/location/grand-theater/ I have reposted those images in the photos section on this page.

The description of this theatre contains an error. This theatre was not “built in 1937” but, according to evidence in the newspapers of the era, existed before that. It was in use in 1933 per an article posted here and during the silent era too. On June 27, 1929 a brief notice appeared in the Mineral Daily News of Keyser, West Virginia that read as follows: “Ronceverte - Sound equipment to be installed in Grand Theatre.” It is possible that in 1937 an already existing structure was modified in a major way.

In the June 29, 1922 Hinton Daily News, the Grand of Ronceverte is referred to as the “New Grand.” See that notice in the photo section.

The original Grand Theatre in Ronceverte was a wood framed building dating from the 1910s that was demolished to make way for an entirely new building that was erected on the same site in 1937.