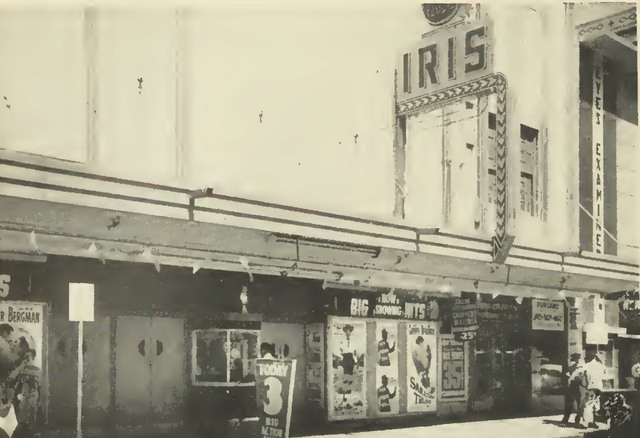 I was eating at a local restaurant that had a photograph that included this old theatre. The owners didn’t know where the photo was from, they had acquired it when a Souper Salads was remodeled. They thought it might be from Houston, as another photograph was from there.

After much searching, using clues from the photograph, I finally tracked down the same photo on the website for the "Center for American History"!

The Travis Theatre was opened on April 13, 1913. It was renamed Iris Theatre on June 7, 1919. Iris Theatre was home to the first Reuter Theatre Organ in 1925. It was the first truly orchestral instrument made by Reuter as a 2/5 unit organ for the Iris Theatre. Actor Jack Valenti was from Houston and one of his first jobs was showing people to their seats in this theatre. The theatre was also home to a radio station "WEAY" in 1924.

hello…I purchased a building that once was the IRIS movie theatre many years ago..I have converted it into a banquet hall. but I want to put back some of the old movie theatre look. There are no pictures of the interior of my IRIS. So if anyone has any old pictures of their IRIS theatre please send me a copy. What I want to do is perhaps take some of each of the pictures of the IRIS and reconstruct the look of the old time theatre. I even want to put back a front markee of the IRIS…Thanks for any help…Joe Hig

There is a nice photo of the Iris on this page:
http://tinyurl.com/2tadbk

This house opened as the Travis Theatre on April 13, 1913, according to Cinema Houston: From Nickelodeon to Megaplex, by David Welling. Welling says the name was changed to Iris Theatre in 1919, when Will Horowitz took over the failed vaudeville house and converted it to movies. The impression the 1956 Boxoffice article gives that the name change took place with the 1956 remodeling is the result of careless wording by the writer of the article’s headline.

Horowitz actually named the theater Iris after his daughter, but he was apparently also motivated by pecuniary concerns. Welling says that Horowitz had the T in Travis altered into an I, and removed the A and V. Grouping the remaining letters together changed the theater signage to read IRIS at minimal cost.

Welling’s book gives the date of the last show at the Iris as July 26, 1965. The Iris and the Rivoli Theatre, around the corner on Capitol Street, were demolished on August 15, 1965.

Iris theater back in the late 40’s early 50’s was the the place to go if you wanted to see a risque movie . It was also the hangout for local pan handlers to take a nap or sleep off a drunk. My mom used to work across the street at Columbia Dry Goods, so I got to know it quite well; sneaking in to watch steaming scenes of intimacy (TV14 by today’s standards). The place wreaked of stale cigarette smoke, and various unpleasant body odors.

Five cents was all it took to get you into the Iris Theater in the early 1940’s. Of course, if you wanted popcorn that would set you back another nickel. If you were really “flush” you might be able to get a sack full of those little wax bottles with juice inside. Suck the juice and chew the wax. What a deal. A nickel would also get you jujubes or a roll of Necco wafers. I liked the purple best.
The first nickel was the most important. You got a double-feature western or “shoot ‘em up”, as they were called in the 1930’s and 40’s. You also got 5 or 6 really good cartoons, a selected short subject like the “Three Stooges” or “Pete Smith Specialty” and another chapter of the current serial. Gene Autry made the first science fiction serial that included Martians coming to earth in a Western setting. The last scene of all serials featured a disastrous outcome for the hero such as a car going off a steep cliff. You had to come back next week to see how the hero escaped. He always did. You also got a Movie Tone Newsreel that featured the latest war news and it was always upbeat. The Newsreel was a good time to go back to the lobby for another treat. The film never stopped rolling unless the film or the projector broke. When you got to the point where you came in you might leave or you might stay to see Sunset Carson or Lash Larue shoot the bad guys one more time. Whenever you left, the movie went with you.

I was old enough to go to movies by myself about ten years later than Rayfrazier. By the early nineteen fifties, the cost of a movie ticket for a kid under twelve had gone from the nickel he paid in the early forties all the way up to nine cents. The runaway inflation after WWII nearly doubled the price of everything, including movie tickets. I recall noticing that an adult ticket at the Wayside theater in the early fifties was sixty-five cents. But, I could still buy a Tootsie Roll in the theater for a penny and they still sold those wax things Rayfrazier mentioned that were full of flavored juice. Post-war inflation was so bad, I remember hearing my parents complain when the price of a can of coffee went up to an outrageous twenty-five cents!

Nine cents was the norm for a kids movie ticket until 1953 when movie tickets went up a nickel to cover the cost of the polarized 3-D glasses. Later that year, the 3-D fad was on the way out and The Robe opened downtown in CinemaScope, which was advertised as the 3-D miracle without glasses. CinemaScope was such a big deal in 1953 that I had to pay twenty-five cents for a kids ticket to see The Robe, which was the most money I ever paid to see a movie up to that time. In the fifties we still had the Three Stooges and Pete Smith shorts and every movie had a cartoon and a newsreel, plus the coming attractions. I think that practice continued until somewhere around 1960. By the end of the fifties everyone had a TV set. Television killed the need for newsreels and people got enough of cartoons and The Three Stooges on TV. But, movies still ran continuously in the fifties, except for the rare roadshow attractions that had reserved seats and an intermission.

Because movies ran continuously all day in the fifties, I almost never saw a movie from the beginning to end. I would usually come in around the middle of the picture and then have to figure out who all the characters were and what happened in the first half of the movie. But, I could stay to see the first half of the film when it repeated and then I would find out if I figured out the plot correctly. It sounds like a weird way to watch movies today, but I was used to it and it was probably a good problem solving exercise for a young mind.

By the fifties, serials had moved from theaters to TV, except for the Saturday Morning Fun Clubs which ran at nearly every Houston theater on Saturday morning. I saw the Gene Autry serial that Rayfrazier was talking about, but by the fifties it was only showing on TV. That serial was called The Phantom Empire and the people who lived in the futuristic underground city under Gene Autry’s Radio Ranch weren’t Martians. They were descendants of the lost tribe of Mu, who survived by going underground during the last ice age. For that reason, they had thousands of years to advance scientifically before humans reappeared on the surface of the earth. The Phantom Empire Serial was made in the nineteen thirties so it had a nineteen thirties concept of what a city of the future would look like. Styling that looked modern in the nineteen thirties changed greatly after WWII and The Phantom Empire was laughable by the nineteen fifties. The clothes of the Muranians and the cardboard box robots were hilarious in the nineteen fifties, even to a kid like myself. 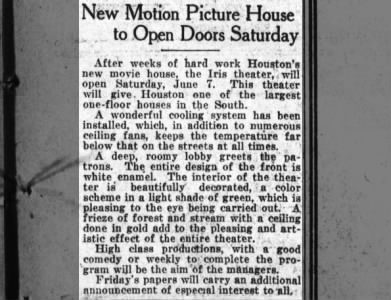