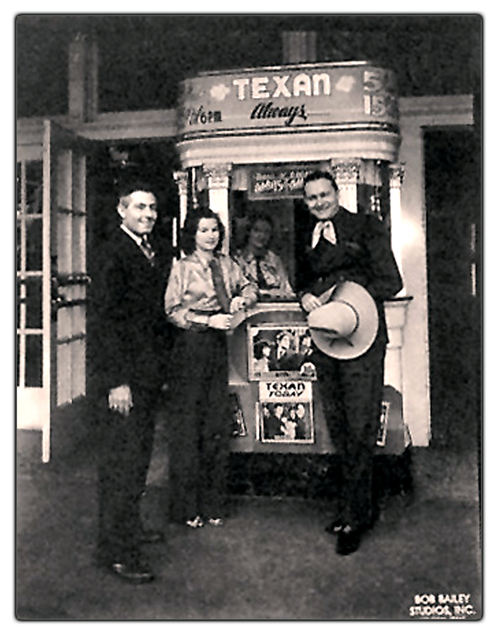 The Texan Theater owned by Will Horwitz opened on April 4, 1925 with Marion Davies in “Janice Meredith”. In the early-1930’s, Horwitz was planning to air-condition his three vaudeville/movie theaters located in downtown Houston. The three theaters were the Iris, the Uptown and the Texan Theaters.

Realizing that his air-conditioning project would require excavating the basements under the three theaters, Horwitz decided to connect them with a tunnel. The tunnel became part of Horwitz’s “Uptown Center Project”, which included shops and restaurants upstairs and a penny arcade and a German wine tavern downstairs. Horwitz died in 1941.

The Texan Theater was closed September 8, 1953 and was demolished. By the late-1960’s the tunnels were also demolished.

In Don Lewis'1937 photo of the box-office I believe the man on the right was singer/moviestar “TEX RITTER”.John Ritters father.The other two are still unknown characters to me anyway.Thanks for the boxfiice article Gerald.

By the way the other two look like they are theatre employees,maybe the manager and usherette?

Thanks Don love all your theatre photos.

According to an ad in the opening day’s Houston Post-Dispatch from the Baldwin Music Shop, the Texan was equipped with a Baldwin piano “which will be used exclusively in broadcasting.”

From 1937 a photo of Tex Ritter at the box office of the Texan Theater in Houston.

Will Horwitz was an operating partner of Interstate Amusements a Paramount affiliate!

Linkrot repair: The September 19, 1953, Boxoffice article about Will Horwitz and the Texan Theatre, to which Gerald A. DeLuca linked on June 27, 2010, can now be found at this link. It notes that the last movies at the Texan had been shown on September 8. The theater was still successful, but had lost its lease. It was demolished to make way for the new home of the Houston Club.

I remember the tunnels that ran under downtown Houston. I didn’t know why they were built until now, but I thought they were very cool when I was a kid.

To reinforce Joe Vogel’s admirable fight against link rot, that long article with photo can also be found at the Boxoffice site.

The Texan Theater had a handful of incidents throughout the years.

The theater was first managed by Herman V. Dees of Houston, who was 35 at the time of grand opening. Exactly 2 years later on November 26, 1927 at the age of 37, his wife, Minnie Dees, stormed inside the theater to find her husband. While a film was playing at the main auditorium with an unknown amount of people inside the theater, Minnie finds Herman and pulls out a gun, firing 4 bullets at him and was killed. The audience was thrown into a panic and evacuated the theater entirely, including one patron said that a woman has shot Herman and ran away from the building. The assassination itself led into the arrest of Minnie, and was thrown into custody. The couple though had been separated for a brief period of time.

On March 12, 1946 during a showing of “Dr. Terror’s House Of Horrors”, a man, 35-year-old George Dunsworth of 1904 West Dallas Street In Houston suffered a heart attack in the auditorium. He later died before arriving at Jefferson Davis hospital in Houston.