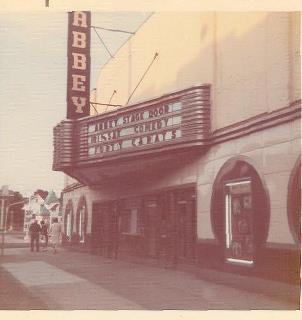 The Lawndale Theatre opened in 1922 and had an original seating capacity of 1,217.

It closed in 1964 and became the Abbey Stage Door Theatre.

I acted there in the late 1960s, early 1970s. The theatre was almost completely intact, with 500+/– seats. A revolving stage was added as well as a dressing room. Other than that, it was almost completely original. I believe the theatre was sold in the late 70s or early 80s. It first became a health club, then a daycare center. There are those who believed the building was haunted, as many of us had odd experiences there.

I was in “Oliver ” there in 1967 as a workhouse boy. It was great fun, and since I lived in Lawndale I could walk there. The revolving stage was so cool!

Its still there as a daycare for tots!

The Lawndale Theatre seated 1,217 when it opened in 1922. Later refitted for live theater, it was renamed the Abbey Stage Door and seating was reduced to 850. Seating had been reduced again to 500 by the time the Abbey closed in 1964. A health center for a time, the theater has been a day care since the late 1970’s.

Does anyone remember my Dad, Bob Simson, who played Bill Sykes in Oliver and Captain Von Trappe in Sound of Music? He would love to hear from you. He is 85 years old now and we were enjoying this site about Abbey Stage Door.

Yes, I acted with Bob In Sound Of Music in 1965,playing Friedrich, and I remember Bob fondly.

It was never called “The Fox Tots.” It’s a preschool and a day care center called “Time For Tots.” Still operating, it’s pretty easy to recognize what it is! The marquee tells you!

I was an usher and sold juice and soft pretzels during the musical MAME. It was a wonderful experience. The cast was so very talented. The staff were so friendly and so much fun. What a great memory.

I appeared in mame, fidler on the roof, how to succeed, oliver etc. I also choreographed several of them. TONY MARINO.