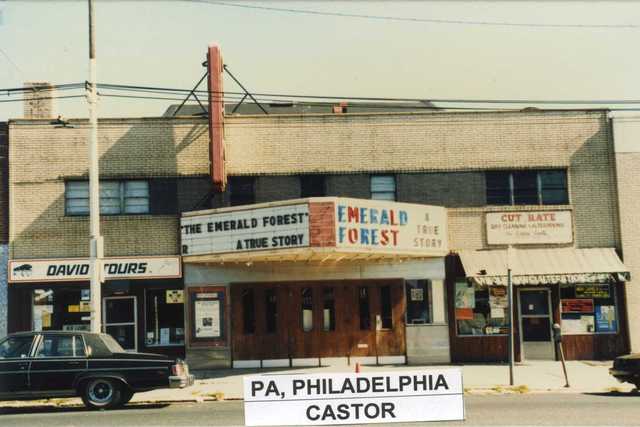 The Castor Theatre opened in 1936 with 446 seats as a subsequent run movie house. It was built at Castor Avenue at Fashawe Street, and designed in the Art Moderne style. By 1950 it was operated by the A.M. Ellis Theaters Co. chain.

The theatre closed in 1989. The Castor Theatre became a furniture showroom. It is now a 99c store.

My uncle Myer was the managerof the Castor for 30 years. My girlfriend (now Wife…41 years and counting) saw a gazillion movies here (free admission) and the other Ellis chain movies like the Tyson, Benner, Hiway, Bala, even the Tower (before the rock and roll shows. Great great momories of Woody Allen, Star Wars, Willard…on and on. Boy do I miss those days, it was such a great neighborhood.

All of the old movie palaces had grand staircases that led to second-floor lounges. Many were furnished and carpeted. Smoking was confined to these areas and the presentation could often be viewed from this vantage point. If you have never experienced one of these venues, you definitely need to get out more!

My recollection: I “heard” the Castor was built by Ezra Stone who played “Henry Aldridge” on radio. Hey, I could be wrong! The theater was very shallow, just a few rows separated the front from the back row. I believe I saw “Holiday Inn” there. Bill White from “down” Larder St.

The theater is not ghetto but is in a proud working class community. The neighborhood does have a name-Oxford Circle/Castor Gardens-the same name it always had. The alley around back is actually a common driveway. That graffiti is the work of those suburban kids, probably your neighbors! And you don’t have to feel uneasy. That old beat-up looking van belongs to an undercover police officer who lives in one of those tiny row houses. So you see, not everything you see is as it appears!

TheaterBluff1: You say that Cinema Treasures does not have a page for the UA Grant Plaza Cinema 9. But I just left the UA Grant Plaza page, and there you are, with almost a half page comment on a page that you say doesn’t exist. Did you make a wrong turn on that fantasy highway you travel?

TheaterBluff1: Let’s try this one more time. The Castor Theatre and the Tyson Theater still coexist on Castor Avenue. They are four blocks apart. The Castor Theatre is at 6627-33 Castor Avenue @ Fanshawe Street (between Fanshawe & Unruh Streets). The Castor Theatre opened in 1936 and closed in 1989. After closing, it became a furniture showroom. It is now a 99c and up grocery store.(And no, they never sold furs there)! The Tyson Theater, four blocks north of the Castor, is at 7043 Castor Avenue @ Brighton Street (between Tyson & Princeton Avenues). The Tyson Theater opened in 1940 and closed in August, 1987. In that same year, Mirror firs bought the theater and retained its looks. They even had a mannequin in the box office. Later, a furniture store replaced Mirror. At the end of 2013, the space remains empty. Got it? Finally!

The Castor Theatre opened in 1936 and was designed in the Streamline Moderne/Art Deco Style by Thalheimer & Weitz, (Clarence Stern Thalheimer, AIA (1898-1984) & David Daniel Weitz, BS, AIA (1895-1976)), an architectural and engineering firm in Philadelphia. Thalheimer & Weitz also designed the Devon Theatre (c.1946) in Mayfair and Suburban Station (c.1930) in Center City. The theater was constructed by the Golder Construction Co. and included two adjoining retail stores, one on each side. The theater closed in 1989. Today, the marquee remains and reads: CASTOR 99c & UP GROCERY STORE. The adjoining stores (6629 & 6633 Castor Ave.) are now part of the grocery store.

Molly123 was your uncles last name Goldman? If so I knew him well. I worked there part time circa 67. Very interesting man he made a wallet for me which I think I still have.

Grew up loving the place. Lived three blocks from it. Best memory was when ET played there for the better part of an entire year. Classic.