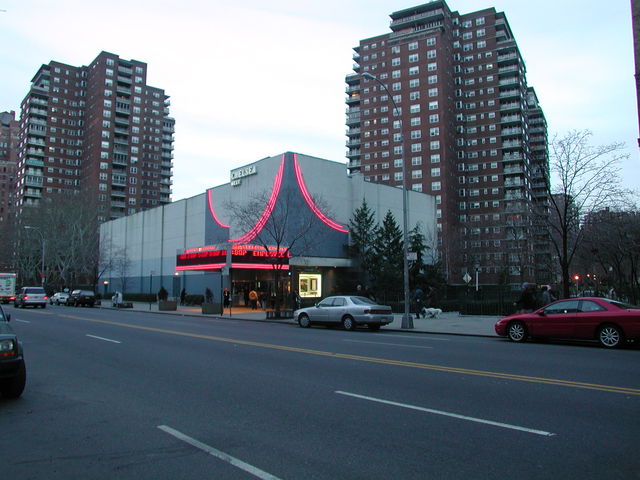 Over the years, the green-gilded theatre has been extensively renovated. On December 14, 1984 Walter Reade triplex the theatre by twinning the lower section of seats and converting the mezzanine into another auditorium. On December 6, 1996, Cineplex Odeon un-twinned the lower section and renamed what became a two screener as the Chelsea West Twin Cinemas.

Shortly after the renovation, Cineplex Odeon merged with Loews and due to an antitrust agreement, divested this theatre. Clearview took over. The two screen Chelsea West Cinemas was booked as a combined eleven-screener with the nearby Chelsea Cinemas 9, that is just down the street. The theatre was tastefully maintained, but lost its 1960’s flourishes, save the green tile on the façade and in the bathrooms. Clearview ceased operating the Chelsea West on February 10, 2008.

In 2006, the School of Visual Arts began a 26 year lease on the theatre, to use it as a repertory and special event venue, and renamed it the Visual Arts Theatre. Some people had expected the School to takeover a theatre on the eastern end of its campus, but that instead became a concert venue, the Blender Theatre at Gramercy. Designer Milton Glaser renovated the exterior and interior of the Chelsea West, retaining the two auditoriums with 300 and 550 seats. Upgrades will be made so the theatre can present digital, 3-D, as well as 35mm and 70mm. There will be tie-ins with the Museum of Moving Image, and possibly other organizations. On April 2, 2008, the Visual Arts Theatre presented its first film, the premiere of “Cook County” in the Glen Arts Film Festival. By 2015 it was known as the S.V.A. Theatre.

I always thought this theater was a bit of a pain in the neck, and that BoxOffice article reminded me why — short lobby, steps down into lounge, entrance in the back, frosted white glass here and there — I never got its supposed charm.

Lovely lobby with a 60’s style sunken seating area and a sprawling candy counter. Stadium seating in the main house thirty years before it became the industry norm. Woody Allen even made it his premiere house after the Beekman closed. A wonderful theatre!

A brief article with photos of the last RKO 23rd Street Theatre appears on this page of the March, 1964, issue of International Projectionist. The house was designed by architect John J. McNamara, in collaboration with Herman J. Jessor, architect of the Penn Station South development, in which the theater was located.

The “new” RKO 23rd Street first opened on the night of February 19th, 1963, with the invitational premiere of Orson Welles' “The Trial,” and with star Anthony Perkins among many celebrities in attendance. Regular continuous performances started the next day. NYC was in the grip of a prolonged “strike” against the major newspapers, so the cinema’s premiere passed largely unnoticed.

“The Trial” also opened on February 20th at the Guild 50th Street in Rockefeller Center. This was the shared American premiere engagement for the B&W adaptation of Franz Kafka’s classic.

I was there the night of the grand opening. A large searchlight was placed outside the theater as limos and taxis pulled up. The biggest surprise was when the 3 Stooges got out and entered. (Probably in town to promote a new film and went out the back door.)

Overall the locals in Chelsea were disappointed. Hoping for programming ala the RKO 23rd St that had closed in 1960. We kids had eagerly watched every brick go into place and snuck into the construction site a few times.

The programming would bounce around for a while between the original art/foreign films, conventional double features began in the summer of ‘63, then First Run domestic films (single feature).

We eventually gave up on the RKO and found the programming, including the double features on the RKO circuit, and variety on 42nd Street to be more to our liking.

The image of The Three Stooges arriving at the premier of an Orson Welles movie based on a novel by Kafka is one of the most astonishing I have ever encountered. After such an eye-poke of a revelation, I’m sure my own childhood will never look quite the same to me again. Woowoowoo.

The 23rd Street West Triplex, the new Walter Reade Theatre complex presently under construction at 23rd Street between Eighth and Ninth Avenues in Manhattan, was opened to the public on Friday, December 14, 1984, it was announced by Sheldon Gunsberg, president of The Walter Reade Organization, Inc.

The other two theatres of the complex were scheduled to open on December 21, 1984. The 23rd Street West Triplex will be New York’s newest motion picture complex and will have a policy of presenting first-run entertainment from all over the world.

The three theatres will feature luxuriously veloured push-back chairs and will be entirely climate controlled, with a unique ionized-air purification system for patron comfort.

Please update, Walter Reade triplex the theatre on December 14, 1984 and Cineplex Odeon renamed it the Chelsea West Twin on December 6, 1996