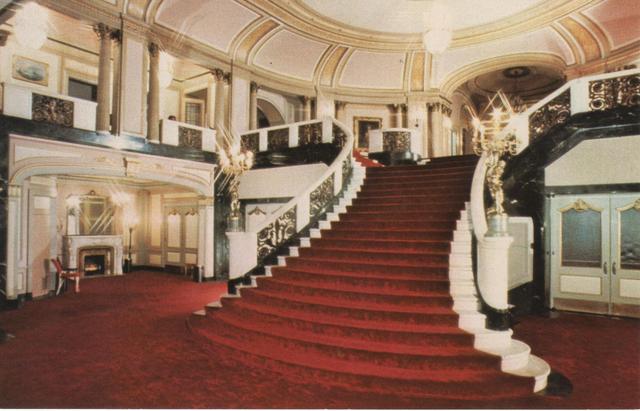 The Keith-Albee Palace Theatre was opened on November 8, 1926 with Bebe Daniels in “The Campus Flirt” as a grand vaudeville and movie house. It was equipped with a Wurlitzer 3 manual 16 rank organ which got little use once ‘talkies’ began. It became the RKO Palace Theatre (Radio Keith Orpheum) in 1929. The world premiere of Henry Fonda in “The Male Animal” was held at the RKO Palace Theatre on March 12, 1942. In December 1968 the Wurlitzer organ was removed from the building and has been installed in the auditorium of Thomas Worthington High School. After almost fifty years of first run films, the Palace Theatre was forced to close its doors in September 1975 and in 1978 was scheduled for demolition.

The theatre was renovated in 1979 and reopened in February 1980 as a performing arts centre. It was purchased in 1989 by the CAPA organization and is a now a premier venue for concerts, stage shows and more. It was closed in May 2018 for renovations to be carried out and these were completed in late-2018.

One very odd thing about this theatre is that when you walk into the balcony, it feels like you are leaning to the side. VERY disconcerting! I experienced it as a child and then again, many years later, when I attended a concert. My dad told me one time that he hated going there for the same reason.

No idea why this happens…probably some type of optical illusion.

10tv story on the Palace. COLUMBUS, Ohio – The Palace Theatre in downtown Columbus has been home to prime entertainment for decades.

The theatre, located in the LeVeque Towner on Broad Street, opened 86 years ago as a Vaudeville house, 10TV’s Jerry Revish reported.

“I saw Lucille Ball play here, Jack Benny was here. Bill Bojangles Robinson played here,” said Todd Bemis of the Columbus Association For the Performing Arts, which manages the theater. “All the greats at that time found their way to Columbus through the front doors of the Palace.”

The theater had a huge boom when Mae West came to town in 1938.

“There’s a photo of folks literally wrapped around the outside of the building waiting to buy tickets to get into see Mae West,” Bemis said.

The Palace Theatre became home to big bands in the 1940s.

“They used to have what they called a rolling stage on the theater,” Bemis said. “They would still show a movie maybe before the jazz concert, but then the movie screen would go out, and the jazz band or the big band would start to play, and they would literally roll them down to the front of the state, to the great applause of the audience.”

Business slowed in the 1960s, though, Revish reported.

“Many of the furnishings of the theater disappeared during that period, all the crystal was stripped out of the theater during the period because they didn’t want to maintain it, keep it clean,” Bemis said. “The wonderful brass doors that we have in our inner lobby, they just painted them rather than polish them, so there were seven coats of paint on those doors applied during that time.”

The problems continued until Frederic LeVeque came along and purchased the theater in 1973.

“The theater actually would have been demolished at that time, and his hotel was to expand from the theater up to Broad and High,” Bemis said.

LeVeque died in a plane crash and was not able to complete his plans.

Years later, his widow decided to reopen the theater after spending $3 million of her own money to renovate the building. She added new seats, plumbing, wiring and a new roof.

“There was nothing really usable in the theater,” Bemis said.

“I’ll always remember that, they took over two full floors of the Neil House at that time,” Bemis said. “They had such a large entourage.”

Bemis said that the Palace Theatre has brought value to Columbus.

“It’s what I like to call the workhorse of our theaters in downtown, because it does such a wide range,” Bemis said.

They used to have a yearly Three Stooges show at the theater; it was always 8 shorts with an intermission halfway through. One year Moe’s son-in-law Norman Maurer was in attendance and told some great stories. In recent years they’ve become too “upscale” for that sort of thing. That’s a major problem I’ve seen in Columbus for the last couple of decades; they’re trying so hard to be gentrified and sophisticated that the old-fashioned fun side of the city is nowhere to be found. The decision makers in this town today would consider something like a Stooges show to be beneath the city’s dignity or something. Sad.

People, yes; the city planners and folks who program entertainment downtown, not so much. There’s just a palpable sense of “look how sophisticated we’re becoming” in Columbus that seems to be sapping some of the fun out of the city. But maybe it’s just my perception.

The organ at the Palace was Wurlitzer’s opus 1407 installed in 1926, a style 260 Special, meaning a stock 260 design was customized for this installation. It had 3 manuals and 16 ranks. Records show that a single set of pipes, an extra Vox Humana, was installed above the proscenium for an echo effect. The organ was removed intact by the local theatre organ society, but as of this writing, its location is unclear.

The Palace organ is at Worthington Ohio High School.

Theater Reopened in late 2018. Not Closed.