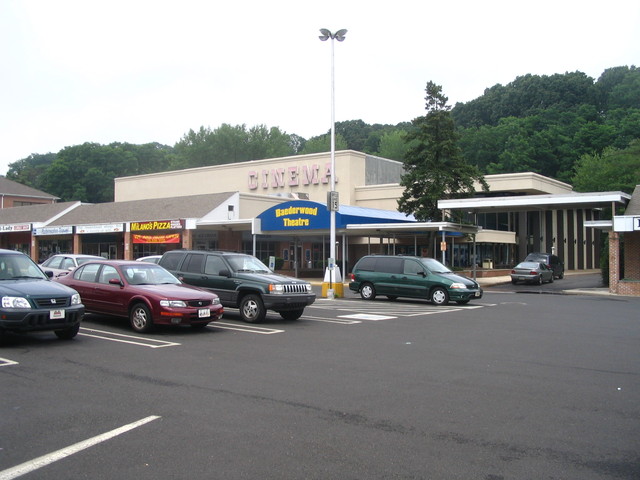 General Cinema Corporation opened this theater as the Cinema, a single screen theater in November 1965. Located at the Baederwood Shopping Plaza at Route 611 and The Fairway in Jenkintown, a suburb north of Philadelphia in Montgomery County. The shopping plaza was a suburban strip mall with a large parking lot.

A large two story lobby with soaring glass walls greeted patrons. After the entrance, but before the main lobby space, was a vestibule with an enclosed ticket sales counter on the left. All seating in the auditorium was on one floor. Reportedly, a curtain was never used before the movie screen.

The Cinema was twinned in 1972, by dividing the auditorium down the middle with a wall. The seats had previously been set so views would focus on the center of the screen, but they were not adjusted, so some sightlines were awkward. Each auditorium had 500 seats and decently sized screens, at least 30 feet wide for scope movies. GCC continued to operate the Cinema 1 and 2 until at least 1983 when the Sameric Corp. of Philadelphia took over operation. After buying the Sameric Corp. theaters in 1988, United Artists operated the theater.

The Baederwood was closed circa 1997 to 2000. Suburban Philadelphia movie operator Greg Wax then began to operate the theater. Wax then also ran the Narberth Theatre and Bryn Mawr Theatre, also in Montgomery County. Wax built a canopy with an awning from the front of the theater to the parking lot. Wax installed surround sound in each auditorium and showed slides before the movie presentation began.

In 2003 the theater closed for eight months for renovations. The theater reopened in December 2003 as the Baederwood Stadium 4 with the former main auditorium reconfigured with stadium seating, all new seats and surround sound. Two auditoriums had 260 seats each with 40 feet wide screens. Two auditoriums had 140 seats each with 30 feet wide screens. The side walls of each auditorium were lined with red fabric of the type often used for screen curtains, and was interspersed with vertical sections of white fabric. On the white fabric were sconces. “The House of Sand and Fog” was one of the movies that reopened the theater. Plans were considered for eventually adding more auditoriums onto land behind the original auditorium.

The Baederwood was the focus of controversy covered by the evening television news and other news media during the 2004 presidential campaign. On October 19, 2004, “Stolen Honor” filmmaker Carlton Sherwood appeared along with many people to attend a special screening of the documentary. Due to telephoned threats of boycotts, lawsuits and violence, the screening was canceled at last minute.

The Baederwood Stadium 4 closed in the end of June 2006, as the owner of the shopping mall proposed to demolish the mall and replace it with new development. The mall owner’s proposal to raze the mall did not succeed, and the closed theatre was converted into a gymnasium.

In June 2002, I saw Insomnia (Al Pacino as a detective) in one of the twin auditoriums. I could tell how large the main auditorium had been. Even though some seats didn’t perfectly face the screen, there were many seats that had fine views. I liked the Baederwood as a twin and would have enjoyed seeing more movies there.

In November, 2005, I saw North Country and was surprised to see it on a reasonably large screen in of the smaller auditoriums of the then 4 screener. The screen was larger than often found in the smaller auditoriums of stadium seated megaplexes!
Hearing that the theater was going to close, I attended during its last weekend to experience a movie in one of the larger auditoriums. I saw the animated Cars.
The Baederwood was an even better theater than it had been as a twin. All four screens were decently sized.
The neighborhood had interesting shops including a Barnes and Noble bookstore. The strip mall had a deli since it opened, a pizza shop, and other eating choices. The exterior of the theater had the appearance of a single screen theater. The canopy that had been added gave people a sense of arrival at an elegant theater.

Here is my photo of the exterior from 2006 shortly before it closed:
View link

And, my photo of the soaring glass enclosed lobby:
View link

I was saddened to see the Baederwood closed when I went to the Whole Foods market a few months ago. I went to see “The Ring Two” there back in 2005. You know what usually happens when you go to see a movie with a house full of teenagers … none of them will shut up during the movie.

Well, to my surprise the staff actually stopped the film to inform the crowd that they will not deal with the overabundant talking during the film disrupting other theatregoers, and will escort anyone “talking out of turn” out of the theatre without a refund.

A great staff to go with a great theatre.

The Baederwood Twin Theatre was definitely an Sameric Theatre by November, 1983