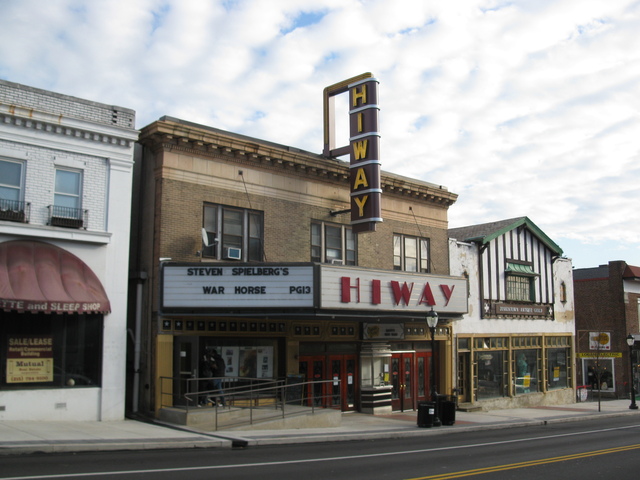 Built in 1913 this was originally known as the Jenkintown Auditorium and was designed by architect Albert F. Schenck. In 1925 the theatre was remodeled by Philadelphia architect William H. Lee, it was outfitted to show silent films and renamed the Embassy Theatre.

In the 1960’s, local movie exhibitor William Goldman operated and refurbished the Hiway Theatre. By 1970 it was operated by A.M. Ellis Theaters Co. chain. In 1985, Irwin Merlin purchased the Hiway Theatere. He renamed it Merlin Theatre in 1988, when he remodeled the theatre. In 1999, Philadelphia attorney Charles Peruto Jr. purchased the theatre and renamed it after his son, the Chas III Theatre.

In 2003 it was purchased by local residents whose sole purpose was to preserve and protect this historic structure. It now operates as a non-profit showing first run, independent and foreign films.

Since November of 2003, the theater has once again been known as the Hiway Theater. About two million dollars worth of renovations and restorations were completed in 2006, which reduced the seating capacity in the auditorium from 540 down to 330. The movie screen is nicely sized at 28 feet wide for ‘scope films. On December 27, 2011, a 19 foot tall replica Art Moderne style vertical sign was installed, having been made by Bartush Signs. Replacing the original vertical sign that was in place from 1940 until the 1980’s, the new neon tower is burgundy with yellow letters, antique gold neon, and aluminium trim. On May 20, 2013, the nonprofit Renew Theatres (which manages nearby Ambler Theatre and Doylestown’s County Theatre) is taking over management, though the Hiway Theater will continue to have its own board of directors.

I added to this site the video of the blade sign installation, http://cinematreasures.org/video/jenkintown-pas-hiway-theatre-vertical-sign-is-installed

Philly.com concentrates on the Hiway in a story about small cinemas making the digital conversion. The Hiway is said to have raised $50,000 so far, about half of the money it needs.

Don’t miss the photo gallery & video about the Hiway at that article (January 13, 2012 Philadelphia Inquirer, front page!) that RickB links. Registration is free online for the Inquirer.

Bradley Cooper grew up and went to this theater as a child. Sunday morning interviewed him in this theater 2 weeks ago. HE is just a good old neighborhood boy whom everybody adores.

As they mentioned on Facebook, last Thursday eve’s DCP screening of classic “Casablanca” sold out at the Hiway!

Facebook link to a painting of the Hiway Theatre by Michael Riley-Hill Art & Design.

Wonderful article with theater history by a researcher who I know- https://www.theprojectorjournal.com/mcgettigan.html